A glorious and fun-filled week for the Bayreuth young scholars 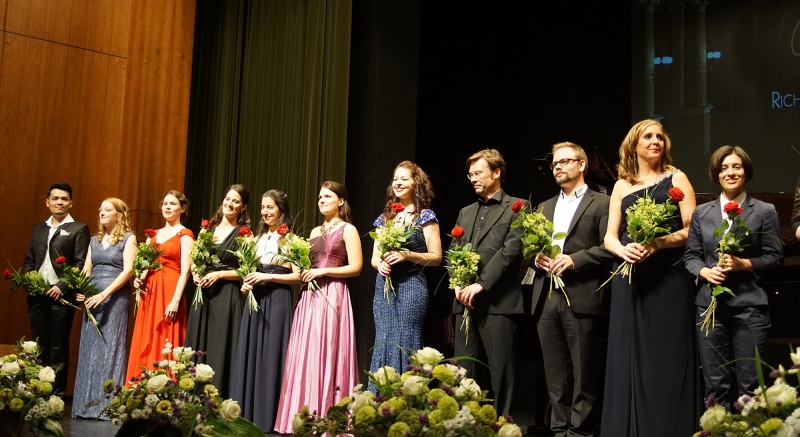 For many, the days when the young artists from all over the world gather in Bayreuth for the Stipendientage are some of the most memorable and exciting of the whole Festival.
Over five days of glorious sunshine, 250 young artists from countries as diverse as China, Portugal, Bulgaria and the USA, gathered to take part in the annual Scholarship days (Stipendientage).  For those participating Wagner Societies, this event reminds us of what we are all about - nurturing and encouraging emerging talent, while giving these youngsters a huge incentive to pursue the excellence that is the Bayreuth Festival - be they singers, musicians, directors, designers, dramaturgs, composers or even philosophers.

The events began with the traditional welcome in the Valhall Lounge, where the participants were greeted by no less than Katharina Wagner, along with Dr. Specht, organiser of the Stipendienstiftung and Horst Eggers, President of the RWVI.  It was proudly pointed out that 30% of the artists currently performing at the Festival were former scholars - and that today's participants should take inspiration from this extraordinary example.  To the accompaniment of a small brass ensemble, the young artists were able to mingle freely and begin the networking that is such an essential component of the whole experience.

Three performances were on offer to the scholars - Der fliegende Holländer, Parsifal and Götterdämmerung - with their highly varied productions and uniformly awe-inspiring singing from both soloists and chorus, along with the extraordinary beauty and clarity of the orchestral interpretations.  These perfomances elicited much discussion among the youngsters and, it is to be hoped, a concomitant level of inspiration.

Other traditional events that took place during these days were the solemn and highly moving laying of a wreath from the RWVI at Wagner´s grave (with an impressive attendance, given the early hour), the communal lunch and the reception given by the town of Bayreuth.  All these events contributed greatly to the enjoyment of the whole programme.

The final jewel in the crown was, of course, the Stipendiatenkonzert, given for the last time for a few years in the about-to-be renovated town theatre (Stadthalle).  As always the programme was rich and varied, featuring more Lieder than in prior years, and somewhat fewer instrumental pieces.

The concert was attended by all the scholars, along with several members of participating Wagner societies and the hall was completely filled by this attentive and appreciative audience.  The guest of honour was Eva Wagner-Pasquier and many members of the RWVI board were also in attendance.

The chosen artists all performed impressively and with enthusiasm and commitment.  The concert began  and ended with beguiling peformances by Leo Herzog on the accordion.  He surprised us all with his extraordinarily nimble fingers, bringing a wholly new perecption of the capabilities of this often-neglected instrument.  Other notable performances were given by the Scottish mezzo Carine Tinney, who sang two Lieder by Liszt with warmth and conviction; the outstanding Georgian pianist Mariam Batsashvilli, who earned huge applause for her highly competent and lively interpretation of  Liszt's Tarantella from Venezia e Napoli; and the star turn from character tenor Benjamin Bruns, a former scholar (currently singing the Steuerman in the Festival's Holländer), who gave a wonderful rendition of David's great aria from Act 1 of Die Meistersinger.

All agreed that this constituted a fine and appropriate ending to a wholly delightful week.  The evening then continued with the pleasantly rowdy farewell dinner, during which a variety of youngsters performed at will.

Huge thanks are due to Dr Stefan Specht, who gives so freely of his own time and works so hard to make this event the success that it always is.  Roll on next year's event!