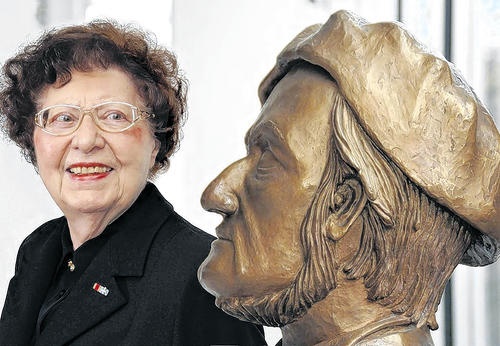 The Richard Wagner Association International mourns Margot Müller, who successfully acted as Chair of one of our member societies for 35 years.
Her motto was always "Work which one undertakes gladly, increases ones joy of life".

In addition to her professional career in the company founded in 1921 by her parents, Ms Müller had for many years been head of the National Association of the North Bavarian Association of Entrepreneurs. In 1983 Dr. Wolfgang Wagner and Dr. Bernd Goldmann succeeded in persuading her to found the Richard-Wagner-Verband Würzburg-Unterfranken and to entice her onto the Board of Trustees of the Society of Friends of Bayreuth, where she latterly worked as an active honorary member.

Thanks to her unique commitment, her Wagner Society became the one with the highest number of members in the world, and whose "Loge" society bus "rootled its way through all the stormy corners of the earth" to all important Wagner events.

The Richard Wagner Association International is indebted to Margot Müller. With the large number of members of her society, she not only made a significant contribution to the financial stability of the RWVI, but also, with her generous goodwill, had a decisive share in the RWVI's successful status. The Richard-Wagner-Verband International mourns an outstanding personality and will always keep an honorary place in our memories for our departed colleague.