A wonderful weekend in Toulouse 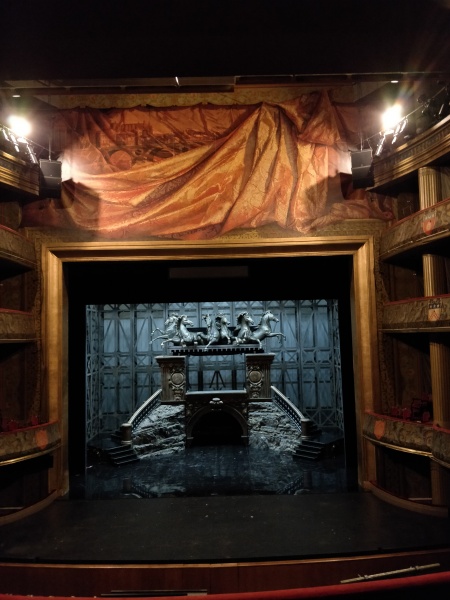 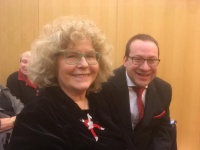 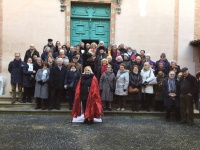 Members of several Wagner societies enjoyed a wonderful weekend in Toulouse, with exceptional hospitality from the Cercle Wagner, celebrating their 25th anniversary
Over two hundred Wagner lovers from France, Germany, Austria and the UK gathered in France's beautiful "rose city" over the weekend of February 9-11 to participate in the 25th anniversary celebrations of the Cercle Wagner de Toulouse.  We all received a very warm welcome from Madame Annie Lasbistes and her wonderful team on the Board and were treated to an exceptional programme of events.  The  RWVI was represented by President Horst Eggers and his wife, and Board members Jacques Bouffier and Andrea Buchanan.  Eva Wagner-Pasquier was the guest of honour (see photos).

The weekend began with a trip to Sorèze, a perfectly preserved village in the foothills of the Massif Central.  The village features an abbey, on the site of an 8th century Benedictine monastery, which served as a prestigious military boarding school from the early 19th century until the early 1990s.  This is now a museum, giving an insight into the spartan daily life of its pupils.  The Abbey also houses a modern tapestry museum, filled largely with the works of the visionary Dom Robert, creator of striking and vibrant designs.

The museum visit was followed by an excellent lunch in the restaurant, attended by the Mayor of Sorèze.  We were then treated to a delightful concert, featuring young pupils from the Ecole de Generville, in the département de l'Aude , who sang the wedding march from Lohengrin under the baton of their enthusiastic teacher Daniel Martinoles, whose love of Wagner was evidently communicated to his pupils.

This was followed by a piano recital from the extraordinarily talented 11-year old pianist Constant Desprez, who played a variety of complex pieces with astonishing skill and confidence.  See photo with Constant and Eva Wagner-Pasquier.

The next day focused on the city of Toulouse, with a highly unusual morning walking tour that took us to some of the loveliest sites, where the soprano Veronica Antonelli, clad in a dramatic red cloak (see photo) performed various arias, making full use of the extraordinary acoustic of the buildings, particularly the Convent of The Jacobins and the Cathedral of Saint Sernin.  The other photo shows Ms Antonelli with the whole group.

In the afternoon, participants were able to choose between visiting the excellent collection of paintings in the Fondation Bemberg (with a notable number of impressionist works, especially those of Bonnard) and a visit to the Musée des Jacobins.

The day ended with a splended gala dinner in the Hôtel d'Assézat featuring dishes from this acclaimed gastronomic region.  Annie Lasbistes welcomed the guests beforehand and President Eggers gave a welcome speech, noting Toulouse's long association with the works of Richard Wagner.  He then presented Madame Lasbistes with a certificate of honour (see photograph).

The Sunday offered us a morning tour of the 18th century Théâtre du Capitole, where a fine performance of Die Walküre under the baton of Claus Peter Flor followed in the afternoon (see photo of final act stage set).  We ended our delightful stay with a drinks reception given by the Director of the theatre, and feasted on superb canapés, again featuring local gastronomic specialities.

We all agreed that this had been a splendid weekend, one of discovery of one of France's most unique and beautiful cities, along with the warmth, hospitality and charm of our hosts in the Cercle Wagner de Toulouse.

You can read about the visit (in French) and see some more photos on the website of the Cercle Richard Wagner de Toulouse.
Back to overview