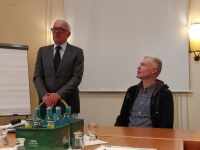 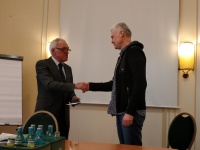 At the recent Board meeting in Frankfurt, RWVI President Horst Eggers honoured Dirk Jenders, President of the WS Frankfurt, with the Golden W award to commemorate 10 years of service.
Dirk Jenders has been President of the WS Frankfurt for 10 years, and in that time  and under his wing the society has grown considerably, has held many memorable and valuable events and notably, has been able to raise the funds to send record numbers of young scholars to the Bayreuth Festival.  The general number is between 8 and 10 per year, which is no mean feat for a relatively small Wagner Society.

All these activities are due in no small way to the energy, charisma and dedication of Dirk Jenders.

It was with pride, gratitude and pleasure therefore that the President of the RWVI, Horst Eggers, presented Herr Jenders with the RWVI badge of honour - the Golden W, awarded to Presidents of Wagner Societies who have held the office for 10 years or longer.

This ceremony normally takes place at our annual RWVI Congress, but as Herr Jenders would be unable to be present in Innsbruck this year, it was decided to present the honour in his home town, on the occasion of the RWVI Board Meeting.