Lohengrin returns to Brabant? A superb weekend in Brussels 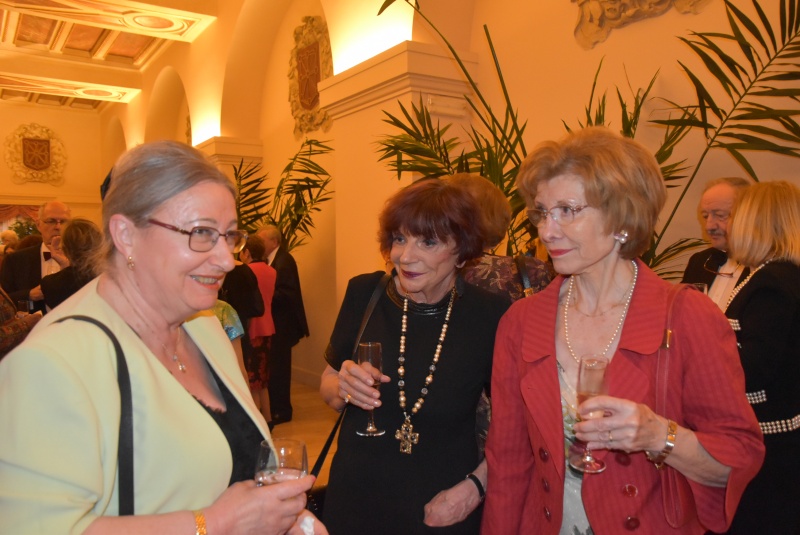 Almost 200 avid Wagner fans gathered in Brussels over the weekiend of 21 and 22 April to celebrate the new production of Lohengrin by Olivier Py.

The Cercle belge francophone Richard Wagner brought together, on 21 and 22 April 2018, nearly 200 passionate Wagnerians from Europe (France, the Netherlands, the United Kingdom, Switzerland and Germany among others) for a full programme of events, centering around the new production of Lohengrin given at the Théâtre Royal de la Monnaie, which had recently re-opened its doors after major renovation work.

The RWVI demonstratetd the importance of this occasion by the presence of three of its Board members, Vice-President, Jacques Bouffier, and Committee members, Andrea Buchanan and Christian Ducor.

Led by its President Jean-Paul Mullier, a fine connoisseur of Wagner's work, surrounded by a team as reliable as it was charming, including first and foremost, Marcel Geerts, Secretary, and Eliane Gyselinck, Treasurer, the Cercle belge francophone Richard Wagner offered the participants forty-eight intense hours of a programme whose richness will remain in their memories for a long time.

The wonderful new website of the Cercle belge francophone kept up the flow of news from this Wagnerian weekend in real time. A first welcome to prolong the pleasure!

On the morning of Saturday 21 April, the Théâtre Royal de la Monnaie hosted three lectures, directly linked to this new production of Lohengrin. Piotr Michal Mrozowicki, Professor at the University of Gdansk, began the event by giving an erudite account of the history of Lohengrin's early performances in Brussels, recalling a missed opportunity in 1850, but highlighting above all the fact that Brussels had seen Lohengrin on stage in French (in Charles Nuitter's translation) as early as 1870, some twenty years before any productions of the opera in France. Ulrich Drüner, a German Wagner biographer, then focused on the mythological and political aspects of Lohengrin. The subtlety of his presentation clearly generated great interest among the audience. Finally, Reiner Pols, dramaturg at La Monnaie, highlighted the initial concepts of  Olivier Py's work, Mr Olivier Py, contributing to the understanding of the production.

All these fascinating contributions will be compiled in the new issue of the Biannual Review, the only French-language journal devoted to Richard Wagner and the flagship publication of the Cercle belge francophone.

Lunch provided a convivial moment at the theatre, allowing participants to meet each other, make new contacts and above all to exchange views on their common passion, before the afternoon's veritable marathon tour of the workshops of the Théâtre Royal de la Monnaie. The highlight of this visit was to discover a gigantic animated model of the Margrave's Theatre in Bayreuth, a place well-known to Wagnerians.

This first day was crowned by a gala dinner at the Hotel Plaza which welcomed the majority of the weekend's attendees.  The star of the evenining proved to be ... a fragment of vase, a true Wagnerian relic!

The story of this porcelain cup offered by King Ludwig II of Bavaria to Richard Wagner was recalled by its current owner. He indicated that this vase stood on the mantelpiece of the Villa Wahnfried for about eighty years, before being damaged in 1945 during a bombing raid. This fragment of a cup, with an intact bottom representing a swan with spread wings, was offered by Wolfgang Wagner to a Belgian patron in gratitude for his support for the reopening of the Bayreuth Festival. This swan, survivor of the vicissitudes of history, was the emblem of this weekend, and also inscribed it, in a way, into the continuation of the Wagnerian adventure.

On the morning of Sunday 22 April 20, several participants took advantage of the rare opportunity to visit the City Hall, the Gothic jewel of Brussels' Grand Place (UNESCO World Heritage Site), to take an imaginary trip back into medieval times.

On the occasion of this new production of Lohengrin, the Musée Fin de siècle in Brussels had also redesigned some of their showcases to retrace the history of the productions of this romantic opera, on the very places where the action of the work takes place (namely in Brabant).

The highlight of the weekend was the performance of Lohengrin at the prestigious Théâtre Royal de la Monnaie. This production has already been almost universally hailed by critics as a visual and musical success. The French director of this new production, Olivier Py, came on stage before the show to presesnt  his intentions and the optics of this production. The Music Director of La Monnaie, Alain Altinoglu, already recognized as a specialist in the score (which he has already conducted in Bayreuth) received a standing ovation. The performance by the orchestra and chorus unleashed public enthusiasm. The soloists - all of an equally high quality, comprised Gabor Bretz (King Henry), Eric Cutler (Lohengrin), Ingela Brimberg (Elsa), Andrew Forster-Williams (Telramund), Elena Pankratova (Ortrud) and Werner Van Mechelen (the Herald). All were warmly applauded by the audience.

This production, captured for the Arte TV channel, is co-produced with the Théâtre du Capitole (Toulouse) and Opera Australia (Melbourne), and will therefore be revised shortly. What a wonderful thought!

Once again, the commitment of the Cercle belge francophone is to be commended for the total success of this Lohengri. These forty-eight hours in the historical setting of the opera will undoubtedly remain an " for many of the participants. Because if the grail could appear, you would have had to have come to Brussels on April 21 and 22, 2018 to admire its presence in the heart of all those Wagnerians gathered by the Cercle belge francophone !