An excellent Singing Competition in Karlsruhe 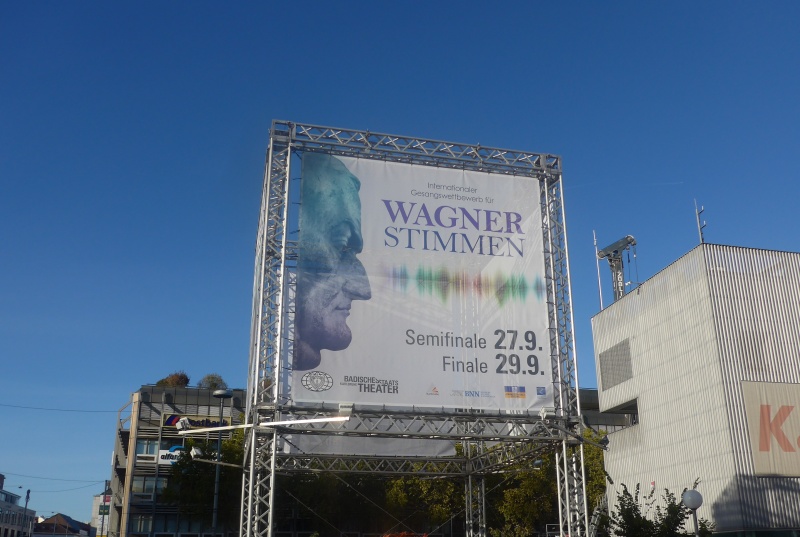 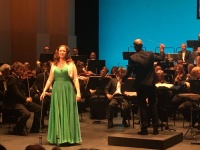 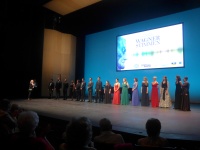 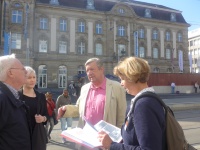 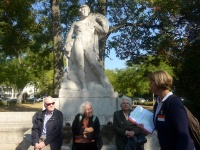 This year's 9th International Singing Competition for Wagner Voices took place once again in Karlsruhe and was, as ever, a wonderful event
We bring you a report by the RWVI Board member Selma Gudmundsdottir who attended the event and a review from the Badisches Tagesblatt by Sabine Rahner (both translated)

Report and photos by Selma Gudmundsdottir

The 9th International Singing Competition for Wagner Voices took place once again from 27 to 30 September in Karlsruhe, blessed with autumnal clear blue skies and warm sunshine.. A full programme of events was on offer, organised by the Wagner Society of Karlsruhe, in co-operation with the Badisches Staatstheater, the City of Karlsruhe and the RWVI.

Of the 87 young singers who had originally applied, 30 were invited to audition in Bayreuth in the summer and 18 were finally chosen to take part in the competition events in Karlsruhe.

The Semifinals with the singers accompanied on the piano took place on Thursday 27 September. The level of the participants was reasonably high and it cannot not have been easy for the Jury to choose the six finalists.

The first prize went to the highly acclaimed Jessica Elevant from Sweden, who also won the Audience Prize. She was the youngest participant at 28 years old. The Wolfgang Wagner Prize was shared between Insu Hwang and Christoph Seidl.  Ariana Lucas received the Peter-Selbach-Förderpreis.

The organisation of the events programme by the WS Karlsruhe, in particular by former Chairman Hans-Michael Schneider and the new Chairman Matthias Krahnert was excellent.  In addition to the two competition events there was a special concert by the Badische Staatskapelle with music by Wagner and Bruckner conducted by Justin Brown, and on the last day there was a performance of Tobias Kratzer’s Götterdämmerung conducted by Justin Brown.

Sadly, few Wagner Societies attended - to their disadvantage, given that this was an excellent and high-quality event.

The RWVI Board was represented by Karl and Esther Russwurm and Selma Gudmundsdottir, who attended the full event, while Hans-Michael Schneider and Alessandra Althoff-Pugliese served on the Jury deputising for Eva Wagner-Pasquier (unable to attend due to illness).  President Horst Eggers accompanied by his wife Inge attended the Finals, along with Gisbert Lehmhaus.

Review (translated) in the Badisches Tagblatt, by Sabine Rahner

In the Badisches Staatstheater six young opera singers faced adjudication by the audience and a jury.

It’s impossible to define precisely what constitutes a Wagnerian voice and what are its unmistakable characteristics? Those responsible for the International Competition for Wagner Voices, which is now being held for the ninth time - and in Karlsruhe for the fourth time in a row - like to point out the extreme length of the operas, to the vocally delicate a feat of strength that a Tristan, for example, has to master, and also to the massively orchestrated orchestra, which has to be overcome in terms of sound.

And then a young Swede comes on stage, sings with a metallic glittering soprano "Dich teure Halle seh ich wieder?" completely effortlessly. – Elisabeth’s aria from Tannhäuser - and everyone in the theatre knows instantly: this is a great, extraordinary voice that has no problem with Wagner's challenges. You even spontaneously think of the iconic Birgit Nilsson.

28-year-old Jessica Elevant convinced not only the audience but also the Jury with two performances at the final concert in the well-attended main hall of the Baden State Theatre. Both awarded, unusually, their prize to this singer, who in the past few months has surprisingly been less concerned with music than with physics, as she was writing a doctoral thesis in that subject.

Six finalists were chosen for the Saturday evening, they had gone through several selection procedures and had been selected from 81 applicants by an international Jury. The competition, which takes place every three years, was founded in 1991 by the international Wagner Society in Lyon, supported by the then Bayreuth Festival director Wolfgang Wagner. Eva Wagner-Pasquier from the Wagner family should have led the jury this year, but had to cancel due to illness. The jurors came mainly from major European opera houses, including the new Karlsruhe opera director Nicole Braunger.  All those responsible agree that Wagner voices need time to mature and consolidate, and are therefore dependent on special support. The competition has an age limit of 35. At the finals in Karlsruhe, however, it was the youngest of the participants who convinced without competition.

In the decisive concert, the finalists were accompanied by the Badische Staatskapelle under the gripping, always foreshadowing direction of Johannes Willig, First Kapellmeister of the theatre. The competition depends on this: It can only be held in a large house with a Wagner tradition, because the final programme is created at short notice and there is not much time for rehearsals. The Badisches Staatstheater is such a house with proven Wagner experience.  It attracted a lot of recent attention with its "Ring of Diversity", especially with its Götterdämmerung directed by Tobias Kratzer, which came second in the current Critics' Choice as "Production of the Year" - after the Bayreuth "Meistersinger" directed by Barrie Kosky.

Four women and two men had made it to the Finals, and there was no Wagner tenor among them. In addition to Jessica Elevant, the American alto Ariana Lucas was particularly convincing with Waltraute’s scene from Götterdämmerung. She is a member of the Karlsruhe Ensemble and was rightly awarded the Peter Selbach Prize.

The two deep male voices of Insu Hwang and Christoph Seidl shared the Wolfgang-Wagner Prize. It was a shame that the German soprano Arminia Friebe missed out at the award ceremony as her offerings as Elsa and Sieglinde were impressive. But like the Russian mezzo-soprano Anna Buslidze, she ultimately stood in the shadow of the winner Jessica Elevant.  She seems to possess everything that is important for a singing career: in addition to the outstanding vocal material and an excellent technique, she also has a winning, natural stage presence.

Achim Sieben moderated the final concert, as relaxed as he was knowledgeable, an exemplary presenter who routinely controlled the award ceremony and finally left the microphone to Horst Eggers, President of the International Wagner Association: He stated that he would like to see the competition return to Karlsruhe in three years.
Back to overview