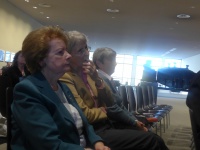 The symposium included the option to attend two opera performances: Die Sache Makropulos by Janacek on the Saturday evening and Lohengrin on the Sunday. The Lohengrin production, directed by Kasper Holten, was the same as that performed during the Wieland Wagner Symposium in 2017 although featured some different cast members as follows: Elsa was now sung by Camilla Nylund, Telramund by Martin Gantner and the role of Ortrud performed by Anna Smirnova. Justin Brown was the conductor.

The symposium itself began on Sunday with a lecture by Dr. Fabian Kern:
"The consolidation of Bayreuth Festival performances after the death of Richard Wagner from the perspective of set design under the leadership of Cosima Wagner.

On Monday Dr. Markus Kiel followed with the lecture: "Fidi and the consequences, the Bayreuth Festival and its legal focus through the will of Siegfried Wagner to the present day", and finally Prof. Dr. Eva Rieger gave a lecture on "Friedelind Wagner im Zwiespalt der Familie und der Bayreuther Festspiele nach 1945".

All the lectures were interesting and informative.

In addition to the lectures, Rainer Fineske, chairman of the WS Berlin-Brandenburg, conducted a conversation with singer Evelyn Herlitizus, who played the leading role in The Makropulos Case.

This was followed by a discussion with Dr. Nike Wagner on the theme "The three protagonists of the Wagner family and their effects on the Bayreuth Festival to the present day", in the course of which
Dr. Wagner spoke very openly and with deep understanding about her family.

It was originally planned that Anja Silja would sing "Dramatic songs by Schubert, Liszt, Wagner and Schumann" in a concert, however a "small" programme change was announced: instead of Anja Silja, the performer was bass-baritone Alejandro Marco-Burmeister, accompanied by Jonathan Ware.

A few members of the Wagner family were in attendance.  In addition to Dr. Nike Wagner, Wagner's great-granddaughter Dagny Beidler also participated. Holger von Berg, the Managing Director of the Bayreuth Festival, was to be found in the audience.

At the end of the symposium, Horst Eggers, President of the RWVI, thanked Rainer Fineske with the following words: ... "congratulations on this once again extremely successful symposium, of which both your Berlin Society and the RWVI can be very proud. Your moderation and your discussions with Evelyn Herlitzius and Nike Wagner were underpinned with a great deal of expert knowledge. Also the lectures of the speakers were very well received by the many visitors. This was a most worthy event arranged by a Richard Wagner Society!"

Translated with www.DeepL.com/Translator
Back to overview