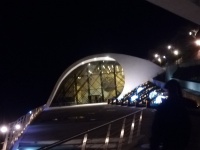 Ravello of course provided Wagner with the inspiration for Klingsor's garden after his visit there in May 1880.  This year, the prestigious competition was held in the Oscar Niemayer Auditorium and Eva Wagner-Pasquier was the guest of honour and recipient of the prize.

Mayor of Ravello, Avv. Salvatore Di Martino presented the prize to Eva Wagner-Pasquier at an evening in honour of Wagner, featuring a declamation by the actor Sebastiano Somma of the letter from Charles Baudelaire to Richard Wagner and the letter from Cosima Wagner to Ravello.  This was followed by a musical tribute of the Philharmonic Orchestra of the Teatro Verdi of Salerno conducted by maestro Giovanni Rinaldi with the Idilio di Sigfrido of the great German composer.

The Golden Tari - a Lifetime Achievement Award was also awarded to Professor Althoff Pugliese in recognitiion of her dedication and achievements especially with young Wagner singers.

The RWVI is delighted at these honours for Eva Wagner-Pasquier and Professor Althoff-Pugliese, so richly deserved.

Please see below a brief article (translated) that appeared in the Positano News:

For over 50 years Ravello has hosted the second oldest festival in Italy. As an ancient meeting point of the cultures of the Mediterranean and as a tourist destination once patronised by the privileged elite and considered by Heads of State and intellectuals throughout the world as a place ideal for creative leisure, the city of music is still synonymous with refinement, elegance, pleasure, respect and hospitality.

The current Ravello Festival derives from a series of initiatives, with the help of two men; Girolmo Bottiglieri and Paul Caruso, who more than anyone else have helped to build the identity of Ravello as “City of music.”
The composer Wagner’s association with the splendid Villa Rufolo was also an inspiration to hold musical concerts in the gardens, where in 1880 the great composer was inspired to write about a magical garden in the second act of Parsifal.

As far back as the 1930’s the orchestra of the Teatro di San Carlo performed in the gardens a couple of times, with programmes specifically related to Wagner.

In 1953, Paul Caruso came up with the idea of creating a festival for passionate Wagner fans. The idea became reality thanks to the Provincial Board of Tourism, then directed by Girolamo Bottiglieri and, on the seventieth anniversary of the death of Wagner, “Wagner Concerts in the garden of Klingsor” (as written on the cover of the programme) began with two evenings given by the Orchestra del Teatro di San Carlo conducted by Hermann Scherchen and William Steinberg. The programme, of course, was entirely dedicated to this German composer.

Over the past 5 years, artists and personalities of international fame have participated at the Ravello Festival. Some of the great conductors to remember are Chung, Gergiev, Penderecki, Termirkanov, Rostropovich, backed by formations such as the Royal Philharmonic and the London Symphony Orchestra, Munich Philharmonic, the Orchestra National de France, St Petersburg Philharmonic and the Rai Orchestra, and personalities including Oliviero Toscani, Don McCullin, Roland Petit, Franco Cerri, Edoardo Sanguineti, Abbas Kiarostami, Katia Labeque, Richard Galiano, Herbie Hancock, Salvatore Accardo, Michele Campanella, Roberto Bolle and Alassandra Ferri, and not least Maurice Béjart, the great French choreographer who died last year, who for three years running presented his work at the Ravello Festival.