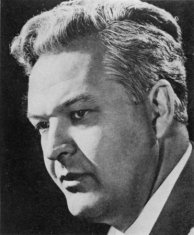 Adam made his debut at the Staatsoper Dresden in 1949 before joining East Germany's Berlin State Opera in 1952.

He appeared regularly at the Bayreuth Festival, where he starred in Lohengrin, Parsifal, Die Meistersinger and other works by Richard Wagner.

His guest appearances included Covent Garden in London, the Metropolitan Opera in New York, and the Vienna State Opera.

There will doubtless be many obituaries over the coming days.

You can find a list of his Bayreuth appearances here
https://www.bayreuther-festspiele.de/fsdb/mitwirkende/theo-adam/

and one of his countless moving appearances here
https://www.youtube.com/watch?v=3CW-DghETks