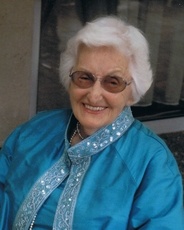 It is with great sorrow that we announce the death at the age of 98 of Verena Wagner Lafferentz, youngest daughter of Siegfried and Winifred Wagner
Verena Wagner Lafferentz lived a very long and interesting life, growing up in Bayreuth and living through some of the most turbulent times in Germany's history.

She died peacefully at her home in Nussdorf on 19 April 2019.

The RWVI offers its sincere condolences to her family (she is survived by five children and numerous grandchildren) and gives thanks and appreciation for her support and enthusiasm in our work to promote the works of Wagner.

Please see the message below from RWVI President, Horst Eggers:

The Richard-Wagner-Verband International e.V. bids farewell to our Honorary Member in deep mourning

As the granddaughter of Richard Wagner, she was the "Grand Dame" of all Wagnerians and always enjoyed great popularity as the ambassador and representative of the Wagner family with all 130 Wagner Societies worldwide.

We will honour Verena Lafferentz-Wagner in our memory for ever.

On Good Friday 19 April 2019 Verena Lafferentz née Wagner died suddenly and unexpectedly at the age of 99.

Suddenly and unexpectedly, naturally sounds a little strange due to her great age, but anyone who knew her as a personality and spoke to her until shortly before her death would never have thought that she would suddenly leave us.

Until her final hours, she was perfectly clear and, as it is so beautifully called in legal German, "temporally and locally oriented". You could literally ask her anything about the family history in the past and present and you always got a satisfactory answer.

Verena Lafferentz-Wagner not only reached an unusually great age, blessed with good health but she was also surrounded by the loving care of her family, who made her aging easier in all respects and thus allowed her to pursue so many of her own interests. Her greatest joy was always to travel around Germany in her car to take part in numerous events of various Wagner Societies and opera premieres and performances of Wagner’s works throughout Europe, representing the Wagner family by her presence.

She only gave up driving her car at the age of 94 and thus was no longer able to attend the Bayreuth Festival, opera premieres and visits to Wagner Societies.

Her long-standing presence at the annual Bayreuth Festival, considered by many to be a permanent fixture in the calendar, acted as a central family focus on the Green Hill for numerous guests and she also saw herself personally as a special component of the Festival.

After the death of her mother Winifred, her affection for the Wagner Societies intensified even further.

Winifred Wagner had been particularly active after the death of her husband Siegfried in 1930 in the existence and promotion of the societies and her daughter Verena took on this affection after her mother’s death in 1980.

Verena Lafferentz-Wagner is also an honorary member of the Bundesstadt-Verband Bonn-Siegburg, which is now once again called Bonn e.V.

For all of us Verena Lafferentz-Wagner was and will remain one of the outstanding personalities of the great family of the composer Richard Wagner and we will keep her kindness and helpful manner in our heartfelt memory.