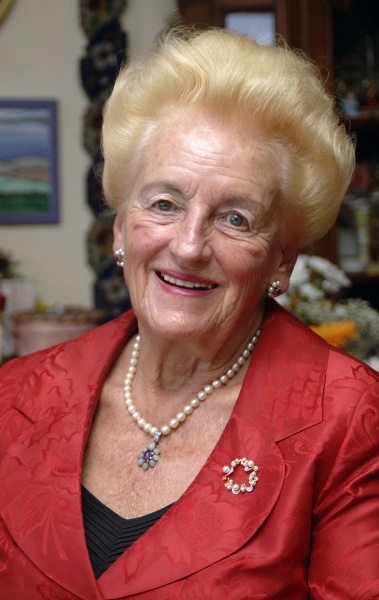 On 15 April 2021, Ilse Hannibal, Chairperson of the WS Mannheim-Kurpfalz for decades and then Honorary Chairperson, died at the blessed age of 95
Berlin, 02.05.2021

"The green ink has gone out forever"!

With her charming manner, always marked by great knowledge of the works and music of Richard Wagner, Ilse Hannibal belonged to the great presidents who knew exactly how to convince and enthuse both long-standing and new members.

She held the office of "President" with grandeur and kindness for 45 years and was a friend of Wolfgang and Gudrun Wagner and Verena Lafferentz-Wagner. Belonging to a generation that stood in the middle of life, also shaped by the stormy times of her generation before and during the Second World War and the reconstruction of the Richard Wagner Associations after the World War. It was a special concern of hers to send young singers to Bayreuth as scholarship holders for many decades, whom she always helped to select with a sure hand and great talent, also thanks to her training as a singer. During her presidency, she sent more than 200 young artists to Bayreuth.

During her presidency she received numerous municipal, national and international honours, such as the Medal of Merit of the Order of Merit of the Federal Republic of Germany or the "Golden W" of the Richard Wagner Association International. Her numerous cultural events are legendary - visits to operas, gala events and the national conference of the RWV in Mannheim with many hundreds of participants, which were always characterised by high standards; she was always aware of the significance that "her" Richard Wagner Association and Mannheim with its National Theatre have for Wagnerism.

We keep Ilse Hannibal in our hearts as an impressive, fascinating and amiable personality. We will miss her legendary letters, always written in green ink.