Grand Cross of Merit of the Federal Republic of Germany awarded to Prof. Alessandra Althoff-Pugliese 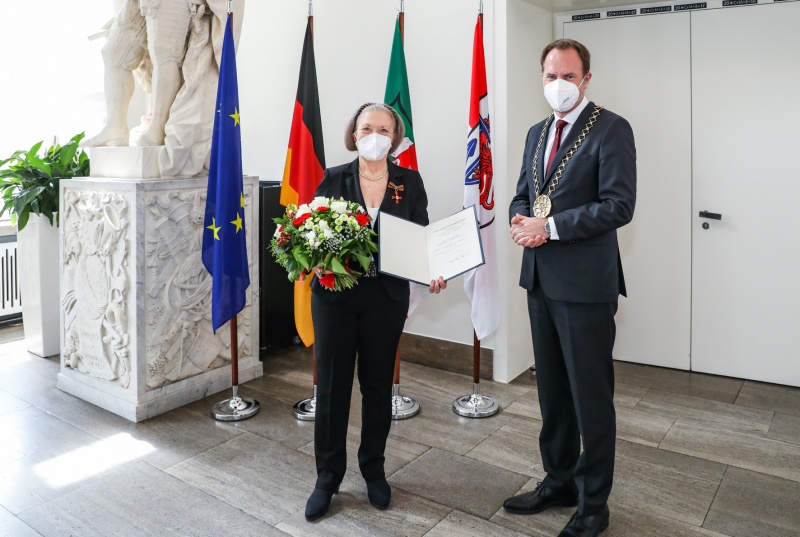 On Tuesday 22 June 2021, Professor Alessandra Althoff-Pugliese was awarded the Cross of Merit of the Federal Republic of Germany for her contributions to understanding between Italy and Germany in terms of Richard Wagner .

Dr Stephan Keller, Mayor of Düsseldorf, presented her with the award in the town hall on behalf of Federal President Dr Frank-Walter Steinmeier.

Alessandra Althoff-Pugliese grew up in the USA. After studying musicology, piano, voice and composition, she performed in all European capitals as a pianist and organist and moved to Italy, where she completed her musical education in Florence and in Milan at the Teatro alla Scala. She also studied at the Accademia Chigiana in Siena, the Mozarteum in Salzburg and the Accademie Ravel in St. Jean de Luz. As a soprano, she soon appeared in the most famous Italian opera houses and took part in international festivals all over the world. She has also made numerous recordings for radio and television. Today she is still active in Italy and abroad as a singing teacher and coach, for example, for the German Wagner singer Anja Kampe.

In 1992, together with her husband, the music critic Giuseppe Pugliese, she founded the Associazione Richard Wagner di Venezia (ARWV). She took over the presidency as a continuation of the lifelong work of her husband (who died in 2010 at the age of 94) and today organises with the ARWV numerous concerts, guided tours and lectures at the Richard Wagner Museum in the rooms where Wagner spent the last months of his life at Ca' Vendramin Calergi, now the Venice Casino. In 1995, the City of Venice transferred the memorial room where Richard Wagner died in 1883 to the Association, and Richard Wagner's descendants attended the inauguration. In 2003, the museum was extended by additional rooms to display Josef Lienhart's Wagner collection, the largest outside Bayreuth. Another expansion of two rooms took place in 2012 to exhibit the collection of Walter Just. The museum is open by appointment only for guided tours in four languages. In 2019, she established the International Richard Wagner Foundation in Venice (the Richard Wagner Association International-RWVI also counted as a founding member) to secure the future of the museum.

International cooperation has long been an issue for Alessandra Althoff-Pugliese. She has been a member of the RWVI board since 1996 and has been second vice-president since 2014. Scientific work in an international context is also very important to Alessandra Althoff-Pugliese, which is why the ARWV has also founded a special study centre, the "European Centre for Richard Wagner Studies and Research", which is to be understood as a network of research institutes (Ca' Foscari University of Venice, University of Bayreuth, Research Institute for Music Theatre Thurnau, Free University Berlin, German Study Centre Venice, Academy of Fine Arts Munich, Biennale di Venezia), whereby, with the help of a scientific committee, international scholars are invited to participate in the symposia organised for the annual "Wagner Days".

The ARWV, one of the five Wagner associations in Italy, also accepts applications for Bayreuth scholarships from the Richard Wagner Scholarship Foundation and since 1992 has given more than 100 aspiring and talented young singers, musicians or other stage professionals from Italy and abroad the opportunity to attend the Bayreuth Festival. The scholarship holders are actively involved in the work of the ARWV even after their trip to Bayreuth.

Alessandra Althoff-Pugliese has organised numerous special events with her ARWV, including important projects with the RWVI, such as the 2006 International Singing Competition for Wagner Voices in Venice in collaboration with the Teatro La Fenice and Richard Wagner's, The Flying Dutchman in 2016 in collaboration with the Richard Wagner Society of Singapore. In 2019, the ARWV organised the RWVI Congress in Venice for the second time after 1994. The German Study Centre in Venice maintains institutional contacts with the ARWV and regularly participates in the events.

For many years, Prof. Alessandra Althoff-Pugliese has been voluntarily committed to keeping alive the memory of one of the most important German composers, not only in Italy. In addition, she makes a significant contribution to the German-Italian and European academic exchange on Richard Wagner and his music and thus helps to foster German-Italian cultural and academic relations.