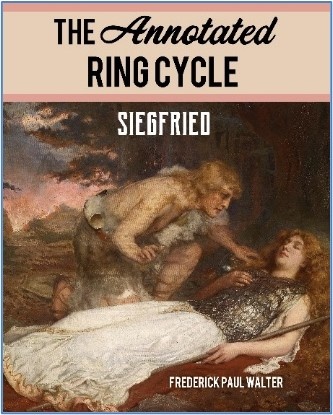 Frederick Paul Walter makes these works accessible not only to scholars and opera buffs but also to fans of Tolkien, Star Wars, Hogwarts, and Game of Thrones through a new English translation
The Annotated Ring Cycle - Siegfried / Twilight for the Gods (Götterdämmerung)
By Frederick Paul Walter

Praise for The Annotated Ring Cycle:

“This is a tremendous piece of work, enabling the uninitiated and the initiated alike to see with crystal clarity what’s really going on in the murky depths of human life Wagner is intent on exploring. It’s an easily followed map to the vast and deceptive terrain. The translated texts are also of exemplary clarity and reveal the libretto’s relationship to the Greek plays that were his inspiration and ideal. Altogether, an indispensable vademecum to any engagement with The Ring.” — Simon Callow, director & writer, author, Being Wagner

“Lively and vivid, Frederick Paul Walter’s new translation will delight those familiar with the opera, while providing an inviting entry point for those who know the tale only through its role as a foundation work that has influenced everything from Bugs Bunny to The Lord of the Rings. The annotations are often wry and humorous, without in any way ceasing to be informative.” — Jane Lindskold, New York Times bestselling author of The Firekeeper Saga

“What a pleasure, as Wagner's great cycle forsakes the world of the gods for that of men, to see this evolution brought to English-language readers with such clarity and insight. A tour de force.” — Conrad L. Osborne, author, Opera as Opera

**************************************************
Even though The Ring Cycle was first staged in 1876, modern fantasy classics have drawn inspiration from its story for years. Annotations spotlight the libretto, lyrics, and stage directions, and the translation conveys Wagner’s humor, rhymes, alliterative effects, subliminal messages, and inventive tale spinning. Plus, it gets the most basic ingredient right: the actual story! It highlights the motives, secrets, and plot twists—what’s really going on and what its narrative shows. Accompanying the translation and annotations are dozens of photos of classic artwork by Arthur Rackham, Howard Pyle, Aubrey Beardsley, the 1876 costume and set designs, and much more. This mystifying masterpiece is a supreme production challenge that Opera houses are still working to perfect today. Anthony Freud, the general director of Lyric Opera of Chicago, has said that the play “marks the high-water mark of our art form, the most massive challenge any opera company can undertake."

Scriptwriter, fine-arts broadcaster, publicist, translator, and college theater director, Frederick Paul Walter has worked for Lyric Opera of Chicago, Houston Grand Opera, Opera Southwest, and other performance organizations. He has written on Wagner, classical music, and opera for nearly half a century and has published modern translations of science fiction thrillers by French novelist Jules Verne for State University of New York and the U.S. Naval Institute, the most notable one being Twenty Thousand Leagues Under the Sea. He lives in Albuquerque, New Mexico.

Published by Rowman and Littlefield, USA