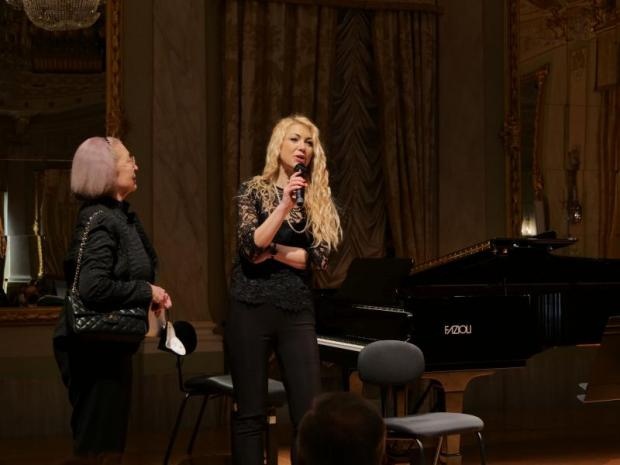 Photo: Homage to Richard Wagner: Councillor Besio and Prof Alessandra Althoff-Pugliese this morning at the concert staged at the Teatro La Fenice

13/03/2022
This morning, in the Sale Apollinee of the Teatro La Fenice, the notes of Wagner and Beethoven marked the tribute to the German composer who died in Venice in 1883. The 'Homage to Richard Wagner' concert was organised by the Richard Wagner Association of Venice (founded, among others, by the City Council) on the occasion of its thirtieth anniversary. Councillor for Citizens' Policies Laura Besio also took part in the performance on behalf of the  City Administration, which is part of the 2022 Wagner Festival.

"I am happy and honoured to take part in this moment on behalf of the Mayor, whose greetings I bring you. The Municipality is here in the dual role of institution and founding partner, in a long journey that began 30 years ago," commented Councillor Besio before the performance. "Never before has the city needed a voice as it does at this time, and this voice is being lent to us today by prestigious musicians, great composers and a setting that needs no introduction. The hope is that the musical work of these excellences will be the background to a feeling of belonging to a great reality, open, generous, not indifferent: this is the narrative of our city in this historic moment".

The 'Richard Wagner' Association of Venice was founded in 1992 in the same Sale Apollinee where the concert was held today by several founding members: in addition to the City of Venice, the Fondazione Teatro La Fenice, the Fondazione Giorgio Cini, the Fondazione Ugo and Olga Levi, the Ateneo Veneto, the Conservatorio Benedetto Marcello, the Italo-German cultural association and the Fondazione Amici della Fenice. In these thirty years it has carried out many initiatives and activities recognised by the Federal Republic of Germany with the award of the Bundesverdienstkreuz (Grand Cross of Merit) in 2020 for the project "Venice for Wagner 1995-2020".