The Festival Sommer in Bayreuth in retrospect. 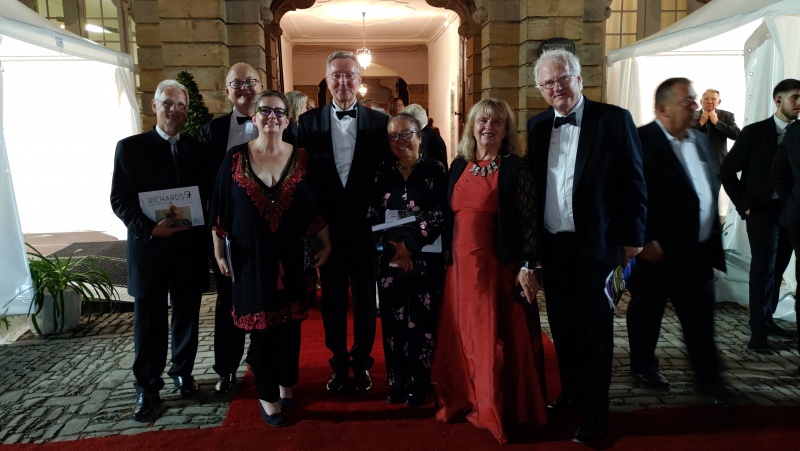 The Bayreuth Festival 2022 came to an end on 1 September with two final concerts conducted by Andris Nelsons. This year's festival season was still under Corona strains and yet not only released the "Ring des Nibelungen" as a new production with the director Valentin Schwarz, but at the same time set up a "Tristan und Isolde" production in case of problems arising. The Tristan served as safety, in case there should be Corona-related problems for the choir, the choir part being recorded so it could be used if necessary, since the choir was also not visible in the production .

Here is a small note about the exhibition!
What do the film "Django Unchained", heavy metal music and French processed cheese have in common with Richard Wagner? The Richard Wagner Museum addresses this question in the special exhibition "VolksWagner. Popularization – Appropriation – Kitsch" (23 July to 3 October 2022) and shows the ambivalent field of tension in which Richard Wagner and his legacy move between high and popular culture in history and the present.  (Text taken from the official Wahnfried website).

Precisely on time on 25.07.2022, the festival was opened with much-awaited celebrities and the premiere "Tristan und Isolde". The production, the orchestra and the singers were unanimously received positively by the audience with great applause. Something that is no longer self-evident these days. Obviously, the director Roland Schwab and his team had struck the right chord with the audience.

The second premiere only started on 31.07.2022 with the "Ring des Nibelungen" directed by Valentin Schwarz, which obviously has to develop much further in the coming years (true to the motto: Werkstatt Bayreuth).

Due to the construction work, the Festival was unable to give any performances in  the Festspielhaus between 26.07. and 30.07. On these days, the Discourse Bayreuth took place in the Kulturbühne Reichshof with Dagmar Manzel and Sylvester Groth and an open air concert in the Festspielpark, with free admission.

The "Tannhäuser" production by director Tobias Kratzer and his team, which now has got a cult status, also experienced evenings of great applause once more. The "Lohengrin" as a kind of alternative, also experienced acclaimed performances with the director Juval Sharon and the artist team Rosa Loy/Neo Rauch. Both productions, each in its own right, are of exceptional quality and it is clear that the audience can also feel clearly, that the idea of the "Werkstatt Bayreuth" is convincingly in the foreground here.

Tobias Kratzer and Valentin Schwarz are two young directors who at different times won first prize at the directing competition in Graz, the only one in the world, the "Ring Award" under the artistic director Heinz Weyringer.

From 18.08.-21.08.2022 we welcomed the annual Bayreuth scholarship holders of the international Richard Wagner associations in Bayreuth.  They attended three performances at the Festspielhaus, including "Tannhäuser und der Sängerkrieg auf Wartburg" as well as "Lohengrin" and "Der Fliegende Holländer". A considerable accompanying programme awaited them, with a reception and welcome at the Richard Wagner Museum Wahnfried and a reception by the Lord Mayor of the City of Bayreuth, Mr Thomas Ebersberger, and much more.
This year, the Bayreuth Festival was again allowed to sell 100 percent of its tickets with a small restriction, because the left side of the entrances for balcony and gallery remained closed. Which had the small advantage that although a good 150 seats could not be sold, the visitors could feel a little more air in the auditorium in the heat this year, sometimes at over 35 degrees outside temperature. We are grateful to the Festival for the fact that despite the approximately 120 corona cases in the house they were able to play according to plan.  The Ring conductor, Pietari Inkinen, was hit hardest, he was completely absent, Cornelius Meister, the former scholarship holder of the RWV Hannover, stepped in for him and saved all the performances of the Ring des Nibelungen.  After a two-year break, we were once again able to host a reception for the chairmen, presidents and companions of the scholarship holders of our international Richard Wagner associations on the balcony of the Festspielhaus, which was attended by 68 guests. We were welcomed by the Festival Director Prof. Katharina Wagner, the Commercial Director Mr. Ulrich Jagels and the President of the RWVI Rainer Fineske. Our heartfelt thanks go to the Festival management, who made our reception possible again this year.