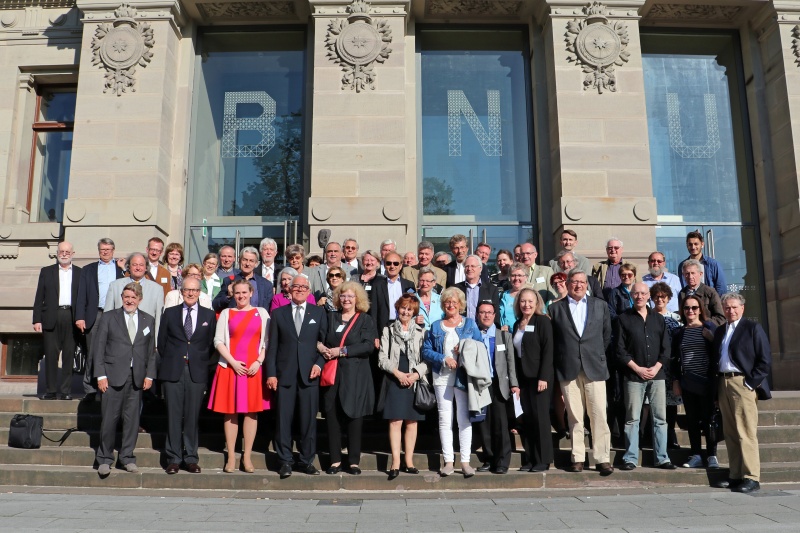 From 5 - 87 May 2016 over 350 participants from all over the world took part in the Richard Wagner Congress in Strasbourg.

A report on Strasbourg 2016

A large number of devotees of the poetic and musical art of Richard Wagner met from 5 to 8 May 2016 in the historic capital of Alsace, and lately capital of the new French region of Grand-Est, in the heart of Europe.

Le Cercle Richard Wagner Strasbourg, founded in 1982 by Louis Oster, who remains President to this day, has over seven hundred members and is one of the largest Wagner societies affiliated to the International Association.

M. Oster’s legendary dynamism ensured that the visitors from all over the world were offered a Wagner programme of a richness, an exceptional quality and an originality which will clearly linger in the memory.

An opening concert, given in the Palace of Music and Congresses by the Mulhouse Symphony Orchestra conducted by Patrick Davin, featuring a Wagner programme and including the Wesendonck Lieder, sung by Eve-Maud Hubeaux, mezzo-soprano, gave the audience the opportunity to discover one of the best French ensembles performing this wholly familiar repetoire.

The Congress was officially opened in the magnificent meeting hall of the Council of Europe by Mrs. Eva Wagner-Pasquier, great-granddaughter of the composer and ambassador of the Bayreuth Festival to Wagner Societies, and by President Horst Eggers. The opening ceremony was interspersed with musical moments, with the audience enjoying the performance of the Strasbourg Wagner Society scholar, Nathanaël Tavernier, whose talent displays all the vitality of the French operatic tradition.

The most spiritually elevated moment of the congress was undoubtedly the Liszt-Wagner organ concert in the ancient cathedral of Strasbourg, a UNESCO World Heritage humanitarian site in the heart of the old city, with a programme in which music from Parsifal took pride of place. International Wagner lovers in attendance will surely never forget those magical moments, created by the world famous Czech organist Michael Bartek.

The quality of French scientific research was illustrated by the lecture given by Professor Mathieu Schneider of the University of Strasbourg, one of the top specialists in the works of Richard Wagner, who both curated and wrote the catalogue for the 2013 bicentenary French Richard Wagner exhibition “Aus gallischer Sicht” , much admired in Strasbourg, Bayreuth and Berlin.

Following a reception hosted by Strasbourg City Hall at the City of Music and Dance, where simplicity and friendship proved synonymous with true French elegance, the Opera studio led by Vincent Monteil performed a concert version of Donizetti’s opera La Favorite, transcribed by Wagner. A moment to document, but also one of intense pleasure.

To close this Congress, the first French performance of Wagner’s “The Ban on Love” (Das Liebesverbot), also sub-titled "The Novice of Palermo" (directed by Marianne Clement and conducted by Constantin Trinks) met with deserved success and was lauded by the audience that filled the house at the Opera National du Rhin, one of the earliest French opera houses, demonstrating once again the mastery of the Wagnerian repertoire by French musicians.

This congress also afforded to many the opportunity to discover the beautiful city of Strasbourg, and the picturesque surrounding villages and enchanting landscapes, including the famous vineyards of Alsace. The wealth of tourist attractions of this region are already well known to many and yet they still give the greatest pleasure.

And last but not least, participants were able to sample more than once the wonderful French cuisine of the region, which, even without frog legs on the menu is arguably one the best in the world, and has also been afforded world heritage status!

This Congress was a model for its well thought-out programme, the excellence of its organisation, and the refinement of its entertainment: we extend a sincere thank you to President Louis Oster and to the Cercle Richard Wagner Strasbourg for this fine example of French geniality.

Following Lyon in 1991 and Bordeaux in 1997, Strasbourg in 2016 provided for the third time, a clear illustration that although Richard Wagner himself was German, le wagnérisme is very French!
Back to overview