Being IN the Ring 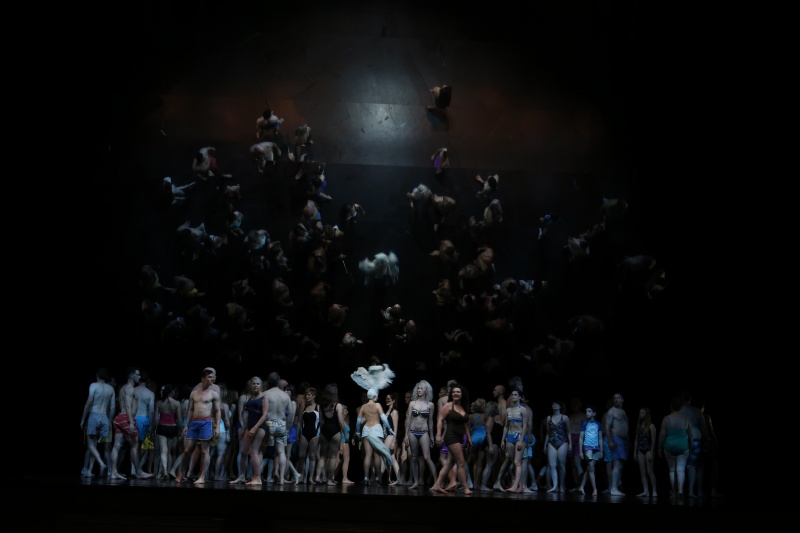 Shirley Breese, former President of the Richard Wagner Society (Victoria) in Melbourne volunteered to take part in the recent Ring production in Melbourne.

Inside the 2016 Melbourne Ring: a personal reflection as a volunteer

In 2013 at the start of my term as President of The Richard Wagner Society in Victoria I attended all performances of the Melbourne Ring through three cycles, so I came to know it well. This year at the end of my terms we had a Ring again, although this time I was in the production as a volunteer.

With about 75 other volunteers of all ages and backgrounds I had intense rehearsals for six weeks before being on stage with the artists and full orchestra for the start of the final rehearsals. We were involved in three of the operas (not Siegfried), to bring out the link the Ring has for us today.

In the Director’s Note in the program Neil Armfield states, “In this production we have been at pains to render a world which connects to our own, but in which the magic of transformation so fundamental to The Ring is understood in terms of the playful frames and gestures of the theatre: this most flexible medium in which we work and tell our story.”

My experience gave me greater understanding of what goes on to create a production in the broadest sense for initially the number of people involved was confusing. After the excitement of a wardrobe fitting for my four outfits the first rehearsal of the brilliant, but most complicated, choreography for the opening of Das Rheingold had me desperate to remember my group letter and several sub-group numbers required to make actions look casual and spontaneous. This was in addition to meeting the other volunteers, Volunteer Supervisor, Associate Directors, Assistant Directors, Choreographer, Artists, Associate Conductor, Assistant Conductor,  Repetiteur, Stage Manager, Deputy Stage Manager, Associate Producer, Actors, Dancers and Technicians etc, etc as well as trying to stand looking nonchalant as they demonstrated how we would feel on the revolving floor. You could call this the deep end.

I quickly learnt what in the opera and musical theatre world is meant by “The Company” because everyone was generous in their communication, respect and support for all involved irrespective of their specific job. This friendly feeling of a company built through all the rehearsals and solidified during the twelve performances.

In Das Rheingold, Act 1 Scene 1, we lie motionless, revolving on a darkened stage so the audience is not sure if we are animate. My thought is that we are the bed of the Rhine for we soon become the water with ever increasing “ripples” before standing up to look at the light and the arrival of the frolicking Rhinemaidens. In all these official photos by Jeff Busby we have become the “sea of Humanity” and those who know me may be able to pick me out of the crowd.

See photo one above

The gold reveal drew gasps of surprise as we removed the gold, cheer-leader pom poms from our bathers to complete the various moves throughout this scene until Alberich steals the gold and we follow him offstage.

As Niebelungs we were identically dressed as factory workers supposedly making iphones. Gold iphone boxes were later used like gold bars to conceal Freia. The tricky part for me in Scene 3 was to come up two ladders, without stopping and in time with the music, to emerge from a trapdoor on the stage then walk in a set pattern called “ant lines” to exit. This always gave me an adrenalin rush as I did not want to slip but it brought a sense of satisfaction and was great fun. Soon we Niebelungs were called back by Alberich to listen to his threat and perform a screaming exit following the sight of the ring on his finger.

In Act 3 Scene 1 of Die Walküre we were on the revolve again but this time as trudging refugees under the descending Valkyries. This clever choreography was to hide dancers who dropped in our midst to be revealed as the fallen heroes.  After we had trudged off stage on cue they were taken up to Valhalla on the same swings.

My role as a volunteer in Götterdämmerung made a connection to the start of the Ring for again we reflected humanity to bring this production close to the experience of the audience. A white faced Siegfried was standing in a totemic pose as we all placed flowers around him, paid our respects and walked slowly off stage. It was a very moving experience as well as being great theatre.

For the final scene we were “the people”, like the surviving Gibichungs watching the conflagration. We had assembled on bleachers at the back of the stage along with many members of the full Company including the chorus, artists, dancers and actors from the earlier operas. We were not revealed until the final music after the Ring was returned to the Rhinemaidens, Hagen was drowned and Brünnhilde had joined Siegfried. The back wall was raised so we all could be seen in the glow from the frame of fire that lit up the stage for a spectacular ending.

A friend has recently described to me her idea of “Post Ring Syndrome” a distinct feeling of let down and I understand what she means. Following my involvement in the 2016 Melbourne Ring I had a more intense bout of PRS and it took some days to emerge back into the busy real world.

Now I have a deeper appreciation of the music and I am even more open to other interpretations of the Ring. Plans are in hand, “Ring Anticipation Syndrome” has kicked in and I am looking forward to Rings in several cities in 2017.

Shirley Breese
Back to overview