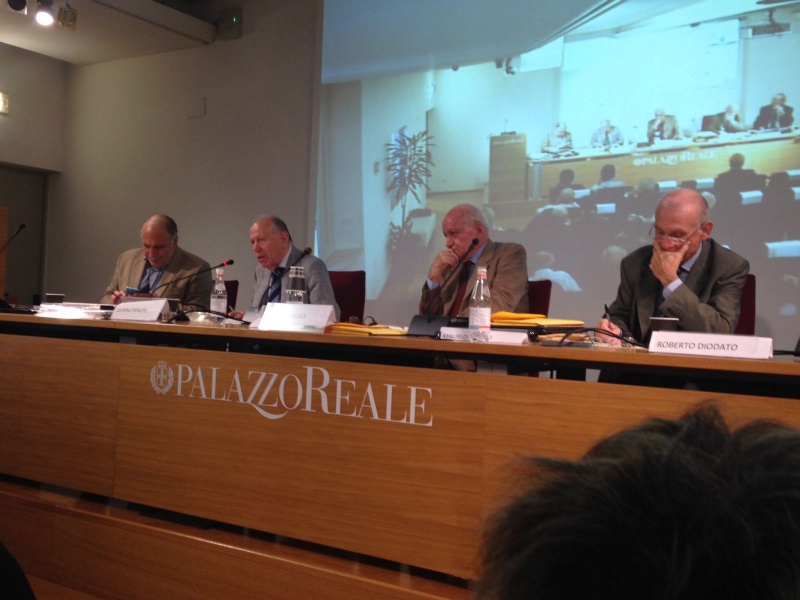 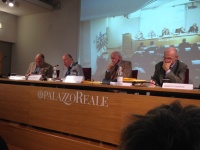 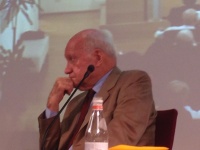 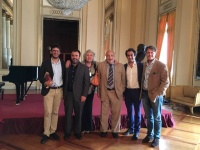 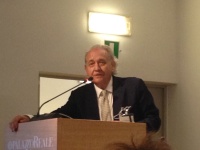 The Associazione Wagneriana di Milano held an international conference In Milan in September 2016 on the topic "Staging Wagner” from the 19th century to the present day".

REPORT ON THE CONFERENCE

The programme was intense, with the first two days being devoted to matters of an academic nature.  The distinguished keynote speakers included J J Nattiez and Patrick Carnegy, and, along with other highly regarded participants, experts in their field, they generated an intellectual forum for the debate of various ideas, at times sparking some confrontation.

On the third day, featuring Katherine Sayr as the keynote speaker, who with her extraordinary contribution delivered a wealth of information in a relatively short time, many ideas were generated, which were then taken into consideration during the round table, stimulating an interesting and very "colourful" debate.

The point of departure was Nattiez’s "fidelity/infidelity" to the original Wagner texts, and to what extent infidelity was intentional. This was followed by Carnegy positing that theatre in Germany has an educational rather than an entertainment role, and that sometimes, certain levels of violence in the interpretations can prove counter-instructive.

Wagner was performed internationally far less often between the two World Wars, and again after the Second, as a reaction to the use of his music by the Nazi regime. It should of course not be forgotten that German nationalism meant different things at different times.  Should that however be the reason to perform Wagner only with an "intentionally" ridiculous staging? And if so, why? Are collective guilt feelings so universal such that only a high level of "infidelity" in the staging of the operas will absolve those who used the music, liked it, but did not compose it?

As all the abstracts for the symposium are available to the public on our website, (and publication of the complete papers is currently dependent on our being able to raise the required financing), we should like to focus on the final debate in the remainder of this report.

The moderator, Andrea Estero, opened the debate as follows: "after listening to the previous speakers from the beginning of the symposium, we cannot say that in order to stage Wagner, it is enough to follow his instructions textually. It would be totally naïve to think that that would make sense".

We must take into account that there is an important transition from knowledge to interpretation, which should not be ignored by the singer, musician or conductor. What about the text? What is the basis for the interpretation?

The stage director has the task of considering whether he should read the text of the opera to be staged as it is rather than in any other way, for example basing his interpretation on the original text from which the opera was inspired. The composer of the music after all based his work on that text.

Dramaturgical analysis should be carried out seriously while working on the text. "We work for the public, and we need to tell them a story". The stage director should give the singer a clear idea of the story and clear indications of how to behave at any given time, employing both good organisation and a pragmatic approach.

Albert Dohmen, as a singer, highlighted  Wagner’s genius by placing the orchestra in his theatre beneath the stage, allowing for the best possibler sound of the music and of the voices. But that isn’t always the case in theatres around the world.The needs of the singers should be respected.

What counts is what you see on the stage. Many productions are highly sophisticated and contain a large number of references, such that audience members need to study the production for a considerable time before understanding what it is about; however, it is not always possible or desirable to attend a production several times before achieving this. One would therefore need to be highly prepared in advance before attending the production or would have to watch it subsequently several times on available media.

At the end of this commentary it was generally felt that is it not too great a demand when the audience needs to be highly prepared in advance in order to understand and appreciate the staging of the opera while watching it, as Wagner wished to expand knowledge of his works all over the world and not to limit this knowledge to a sophisticated elite.

With regard to the issue of the role of education in German theatre, what can be noted about various interpretations from the psychoanalytical point of view?  There isn’t much to interpret when, as in a Tristan in Venice, during the prelude to the second act with all its tension in the music, Isolde turns up with a picnic basket. The only comment that arises is about the "destructive envy" of the stage director towards Wagner’s opera.

Or take the latest Ring in Bayreuth, which focuses on the modern context of oil as the new gold, with settings in Baku and New York among others.  What does the fellatio scene between Erda and Wotan mean? Should we be understanding something we don't? Or can’t we understand what is happening without this? Where did Wagner demonstrate that he meant something like that to be happening and why is the dignity of the opera not being respected?  That is a must, and is clearly supported by what is being sung.  And during Wotan’s farewell from his daughter, Brünnhilde is brushing her teeth and spitting in the sink.  This was seen as offensive and represented a meaningless display of bad taste and ignorance. What about the rats on stage in Lohengrin?

To what extent can "infidelity" to the text be just another point of view of the updated "libretto" and not represent the wholly "intentional" destruction of an existing "masterpiece"?

J J Nattiez invited us to remember that we all have to take into account the reaction of the public. While directors have been advocating modernisation and updating in order to reach the public more effectively, there are limits beyond which it is impossible to go.  Albert Dohmen noted that respect for the dignity of the opera should be taken into account. Martin Knuts added that knowledge of the genesis of Wagner’s operas revealed that most of his operas contained stage directions in addition to the music and that when Katarina Wagner became the Artistic Director of the Bayreuth Festival, she expressly stated in an interview that she would ignore comments about stage directions in the libretti, as she would not be using them. The betrayal of educated public expectations could be very dangerous.

This is not simply a question of the limits of interpretation, it is rather the issue of strange and unfamiliar ideas which come solely from the director.

Last but not least,  the issue of the financial aspects of Wagner operas was raised, which can be so expensive to stage that they could potentially result in theatres going broke. It was noted however that it was possible to stage Wagner with limited resources, by means of very careful organisational management.

At the end, we can conclude that "infidelity" could become a "value" when there is no intention to destroy, Wagner and his work, and it is not done carelessly and thoughtlessly.

But who hires stage directors? Art directors.  So we propose that our next engagement will be with the art directors.

The conference was sponsored by the following:
The Department of Culture of the City of Milan, who donated the use of the Conference Hall of the Royal Palace along with all the required audio and video systems
La Scala, who made available the "Toscanini" foyer of the theatre for the Saturday morning session and also provided support for communications and the organisation of the round table
MiTo 2016, who included the conference in its widely-distributed programme of events

The event was also publicised by the following:
IMS (International Musicological Society)
SIDM (Italian Society of Musicology)
The Department of Cultural and Environmental Heritage of the University of Milan
The G. Verdi Conservatory of Music
The National Association of Music Critics
Friends of the gallery of the Teatro alla Scala.

The conference was funded through private donations from the following:

The programme was as follows:

SECOND DAY: September 16
Conference hall of the Royal Palace
9.30 - Patrick Carnegy, With helmet, shield and spear? A brief history of landmark productions, 1876-1990
Interventions and debate.
11.00 Moderator: Franco Perrelli
Martin Knust, The Stage Gesture of the Wagner Era
Francesco Ceraolo, The Birth of theatre direction and the legacy of Wagner
Marco De Marinis, Wagner and his double: the aesthetics of the Gesamtkunstwerk before, during and after directing.
Marco Brighenti, "Actions of music made visible": contemporary directors faced with in the aporias of "Wort-Ton-Drama".
15.30 - Moderator Claudio Toscani
Jürgen Maehder, The intellectualisation of directing Wagner: from Wieland Wagner to Patrice Chéreau
Kii-Ming Lo, Staging Wagner after Chéreau: The Search for Continuous Innovation at Bayreuth Festival
Marco Targa, Two successful failures at La Scala: Appia's Tristan and the unfinished Ring of Ronconi
Antonio Somaini, Eisenstein and Wagner. Assembly and work of art
Franco Perrelli, A Wagnerian in Stockholm: Ludvig Josephson and proto direction
17.30 - Debate