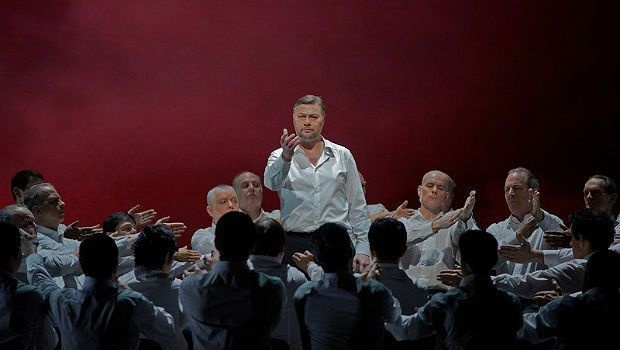 Famous bass René Pape was honored as a Kammersänger of the Bayerische Staatsoper this past weekend
Posted by David Salazar on Opera Wire
Photo: René Pape as Gurnemanz in Wagner's 'Parsifal' - credit: Ken Howard/Metropolitan Opera

Other artists that have received the honor from the organization include tenor Jonas Kaufmann, soprano Diana Damrau, and legendary tenor Fritz Wunderlich, among many others. The award is given to distinguished opera singers.

This is the second time Mr. Pape has been given the honor Kammersänger for a famed theater, after having already received the honor from the Staatsoper Berlin.

The bass is gearing up for a production of “Tristan und Isolde” at the Bayreuth Festival between July 26, 2017, and August 20, 2017. Then he heads to the Metropolitan Opera for a single performance of “Die Zauberflöte” which will be broadcast in movie theaters around the world. He also performs “Szenen aus Goethes Faust” at the Staatsoper Unter der Linden, “Die Zauberflöte” at the Vienna State Opera, and “Parsifal” at the Met in early February. He will follow that with more productions of “Parsifal” and “Fidelio” from March through July in 2018.
Back to overview