Hermann Kronz, Honorary President of the WS Saarland is awarded the Saarland Order of Merit 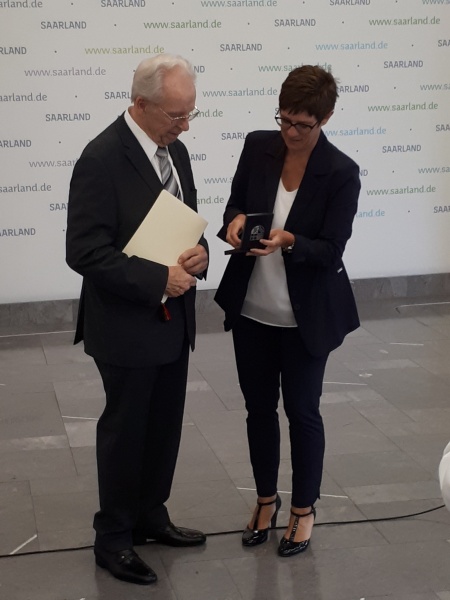 Hermann Kronz received the award of the Saarland Order of Merit from the Minister-President of the Saarland, Mrs. Kramp-Karrenbauer, in a ceremony at the Staatskanzlei in Saarbrücken
The medal was awarded to Mr. Kronz on Friday August 11, 2017 in recognition of his achievements for the Saarland Wagner Society.

When Hermann Kronz was elected Chairman of the WS Saarland in 1991 as the successor to its founder, Otti Maurer, no-one guessed that he would be responsible for this office for almost 25 years.

Back in 1979, in his role as a committe member, he had played a major role in organising a local Wagner conference in Saarbrücken. This conference represented a social event of the first order for the city and the region . For this festival, Hermann Kronz succeeded in bringing together in the capital of the state of Saarland as Festival guests not only Winifred Wagner, but all the living grandchildren of Richard Wagner, namely Friedelind Wagner, Verena Wagner-Lafferenz and Wolfgang Wagner, along with his wife Gudrun. This meeting of the "Wagner clan" would not often happen again.

The year 2000 marked the culmination of Hermann Kronz's efforts for the Wagner Society of Saarland, when, on his initiative, the International Competition for Wagner Voices was held in Saarbrücken, following two initial rounds in Strasbourg , Once again, his distinctive organisational talents proved themselves in carrying out this "Herculean" task. The final concert, moderated by Hermann Kronz, was broadcast live on Saarland's local radio station.

In addition, Mr Kronz was especially committed to giving young musicians the opportunity to perform in the region.

It was his initiative that led to the foundation of the Richard Wagner Interdisciplinary Working Group at the University of the Saarland, and to the award of a WS Saarland German Bursary to exceptionally talented music students. The Wagner Society of the Saarland, and presumably all other Wagner Societies offer our congratulations to Hermann Kronz for this distinction.