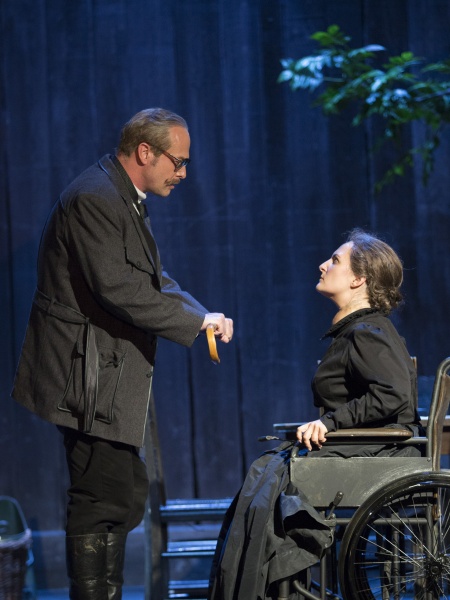 With an eye on the forthcoming centenary of the Oldenburg Opernsparte in 2021, the Oldenburg Staatstheater is currently working on its first complete Ring cycle.
"A theatre that forges a 'Ring' always creates its own illumination. In the 'Rheingold' the Staatsstheater struck a sparkling gem. In this 'Walküre', they have polished it further. "Nordwestzeitung

Director Paul Esterhazy and stage and costume designer Mathis Neidhardt are taking a completely fresh look at the "Weltendrama": Instead of heroic landscapes and fantastic dragon and dwarf caves, the Oldenburger Ring takes place in the mountains - in a microcosm of the mining world , in which the essential humanness of the characters is revealed. This is entirely true to the vision of Wagner, who saw in myth a parable on human existence, presented Siegfried "in a peasant’s smock", and described the whole Ring as a "peasant process" - and who was inspired by his extensive rambles through the Swiss mountains.

Mathis Neidhardt's concept of a revolving platform, featuring a multi-room "tilting hut", allows for fast and frequent scene changes, reminiscent of a cinematic approach to the plot. On the one hand this appears wholly naturalistic, yet on the other, mysterious: "It is the same with the score," explains Paul Esterhazy, "motifs emerge, disappear again, attack or retreat; much is explained later, some things remain Norn-like in their obscurity. But it all revolves around this constant 'Ring'-house, which the characters make into their own: Valhalla, Hunding's house, Gibichung Hall ... "

"With this performance, the Oldenburg Staatsstheater has crafted a success both musically and scenically from the first to the final second, with a level and significance worthy of the largest opera houses." The Opera Friend

Musically, the Oldenburg Staatstheater set itself the goal of offering singers at the beginning of their Wagner careers the opportunity of working out and experimenting with new roles in a non-confrontational environment. In the context of this idea of role debuts, Nadja Stefanoff worked on her first major Wagner part as Sieglinde, Nancy Weissbach, who had already shone in several other Wagner roles, debuted as Brünnhilde in the Walküre, and the Hungarian Zoltán Nyári sang his first Siegmund in Oldenburg. They were joined by Michael Kupfer-Radecky, alternating wth Renatus Mészar as Wotan; both had sung the role in previous productions and were able to develop their interpretations further. Melanie Lang from the Ensemble performed the role of Fricka – with others from the Ensemble singing most of the eight Valkyrie parts. Hunding was performed by the Russian bass Pavel Shmulevich, who was able to build on his previous experience in this part under Valery Gergiev at the Mariinsky Theater in St. Petersburg.

At the podium of the Oldenburg Staatsorchester was Music Director Hendrik Vestmann, who also worked on the production. Two performances were conducted by the First Kapellmeister Vito Cristofaro, who had accompanied the singers throughout the rehearsal phase.  .

"All this was supported by wonderful singers with extraordinary presence, whose guest appearances are a honour to a small house like Oldenburg. [...] and the orchestra, which under the baton of, Hendrik Vestmann, performed an almost breathtaking first act, has clearly exceeded [...] the subtlety of the sound compared to the 'Rheingold'. The enthusiastic audience responded with a veritable hurricane of applause. " Weser Kurier