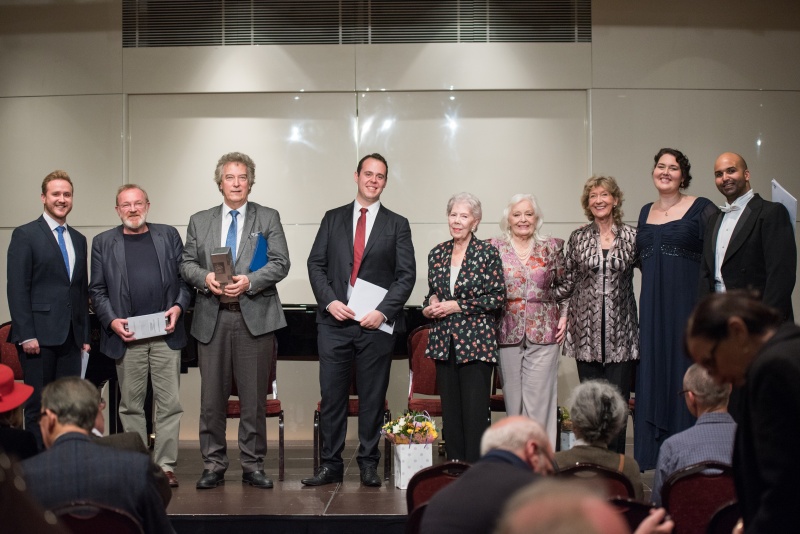 A report, sent to us by the London Wagner Society, on their recent Singing Competition.
It is always the highlight of the London Wagner Society calendar, but the Singing Competition of the 5th November, held at the Royal Over-Seas League in London’s Mayfair, was to be both an outstanding event artistically, as well as a highly enjoyable social afternoon.

As well as the vocal and dramatic excellence of our competitors, the society could not have been more honoured by the judging panel.  Led by our President Dame Gwyneth Jones, the panel was an outstanding mix of the best in the operatic world today, and of the last sixty years.  From the two world class London opera houses, representing the opinion of the conductor was Martyn Brabbins, Musical Director of English National Opera, and from the other side of the footlights, representing the opinions of the casting departments was Peter Katona, Director of Casting at the Royal Opera House.  Representing the performer’s opinion we could not have been honoured with a greater panel than three Dames: Dame Felicity Lott, Dame Gwyneth Jones, and presenting the First Prize of the competition, one of the greatest British singers of all time, Dame Janet Baker.

From the initial twenty or so entries of young singers from both the musical colleges, as well as young performers at the start of their career, the judges admitted that the standard of singing made it an almost impossible task to narrow down the singers to the eight performers who performed for the judges that afternoon.  Five prizes were available.  As well as the top three prizes to be awarded, the competition also awards an Audience Prize for the most popular performer voted for by the public, as well as the President’s award of a masterclass for two of the young singers with Dame Gwyneth.

The competition was very strong.  The President’s Award was given to two singers: one working performer and one student.  Adam Music, currently performing with Welsh National Opera, won the award for this renditions of Nur eine Waffe taugt, followed by Durch die Wälder (Der Freisch?tz.)  Michelle Alexander, currently studying at the Guildhall School of Music and Drama, sang Dich teure Halle, and To This We’ve Come (The Consul, Menotti) and these pieces also earned Michelle both the Audience Prize, particularly, considering the audience for course, for the thrilling piece from Tannhäuser for which the audience showed its appreciation warmly and loudly, as well as the Second Prize.  The strength of her performance of the extract from the Menotti brought both audience and judges to tears.

The Third Prize was awarded to Julien Van Mellarts, another young professional singer recently seen at Opera Holland Park, Cadogan Hall and the Wigmore Hall.  His performances of O! Du mein holder Abendstern, and Mein Sehnen, mein Wähnen (Die tote Stadt) were brilliant examples of a nuanced and controlled technique.  The first prize was claimed from his very first note by Samuel Eli Sakker, another young professional singer recently seen at both the Royal Opera House and at the Coliseum, who sang Willst jenes Tag’s du nicht mehr entsinnen, and Der Trunkene im Fr?hling from Das Lied von der Erde.  His bravura performance of the Mahler is still ringing in the ears of those who attended, and he was a warmly received winner.

After an outstanding afternoon of singing, with very worthy winners, some of whom are already beginning to step out in their careers, the judges took the time to speak to the winners and pass on their advice, before moving on to a very well earned glass or two at a local restaurant.  The Committee of the society hosted the evening to express their thanks, and in return were regaled with stories of operatic mishap and triumph, that our winners now look forward to enjoying.  May we wish them all our good wishes and that they attain all the success they deserve.