Interview with Florence Delaage on the occasion of her new CD 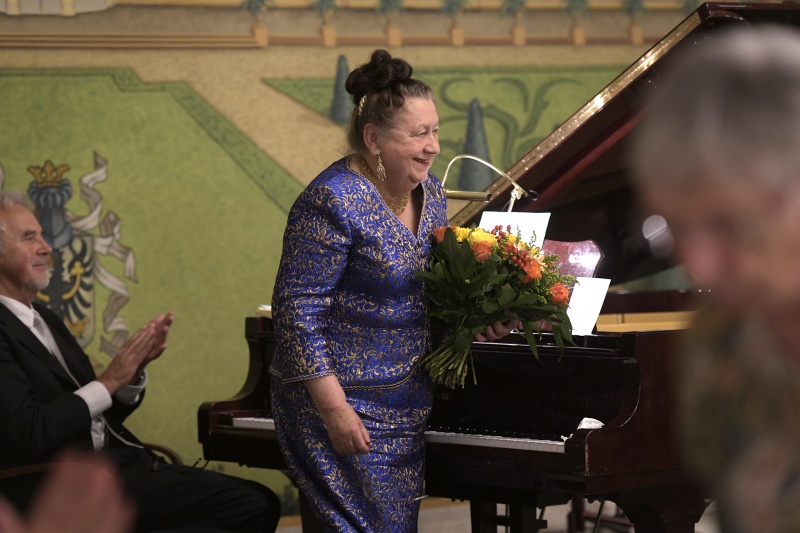 RWVI Board member Christian Ducor in conversation with Madame Florence Delaage, renowned pianist and recipient of France's highest award, the Légion d'Honneur.
Florence Delaage has recorded a new CD, devoted to the works of Richard Wagner in transcriptions by Liszt and von Bülow.

Madame Delaage has inherited the great French Wagnerian tradition from Alfred Cortot, whose last pupil she was.

The CD is the fruit of patient maturity, the delivery of a long familiarity with Wagner's work.

Her international career, which developed in Bayreuth, saw her recently perform at the festivities organised in Berlin from 9-11 November to celebrate the centenary of the birth of Wieland Wagner. The programme will be repeated at the Salle Gaveau in Paris, on 12 March 2018 at 20:00.

This rare artist has given us an exclusive interview, so that we might get to know her a little better.

CD: Dear Florence, you have just made a recording almost exclusively devoted to Wagner, "Endless Wagner", infinite Wagner, endless Wagner  ... Tell me about this infinity of Wagner and the programme that you have recorded?

FD: I recorded the paraphrase (rarely played) of the third act quintet of Die Meistersinger, Hans von Bülow, Romance to the Star, Elsa's Dream, Lohengrin's Reproach to Elsa - this last piece is very upsetting - the Spinning Chorus from The Flying Dutchman, March from Parsifal, Liszt's transcriptions, the music written for Mathilde Wesendonck, composed by Wagner alone during sleepless nights, and then continued in Tristan.

C.D.: How would you define this paraphrase of Hans von Bülow, and what do you think would distinguish it from Franz Liszt's transcriptions?

F.D.: I see it as closer to improvisation with a romantic impulse than as a paraphrase. Hans von Bülow was an excellent pianist. On the other hand, Liszt does more analysis, he is a transcendent composer, whose soul joins that of Wagner. Hans von Bülow was a great conductor, and it's interesting to hear a style very different from Liszt's. Liszt brings his personality into the work of his friend, that he also sought to defend and support.

With Liszt, some transcriptions touch me more. The death of Isolde repeats the vocal part but also the orchestral part. It is a masterpiece of writing whose intensity upsets me. I think especially of the wonderful pianist Dino Ciani, who was my friend. I cried a great deal while playing Isolde's death, thinking about the tragedy of Dino's death.

C. D.: This disc has just been released.  Will you be giving recitals of the music on the disc?

F.D.: I will play in Berlin at a dinner on November 10, as part of the centennial celebrations of the birth of Wieland Wagner and I will repeat this programme on March 12 at the Salle Gaveau in Paris , along with Beethoven's sonata, Chopin's preludes, and Ravel's Jeux d'Eau.

C.D.: This album "Endless Wagner" is a testimony of your passion for Wagner that goes back a long way. Can you share some memories with us.

F.D.: I had a very Wagnerian family. When I was very young, I went to listen to Die Meistersinger at the Palais Garnier, where I was hidden under my mother's dress in order to be allowed in! I was amazed from beginning to end.

I have never stopped listening to Wagner ever since. I have a predilection of course for the Ring of the Nibelung, certainly also for Tristan and Parsifal, but ... I love them all! Perhaps I am thinking particularly of the chords of the traveler in Siegfried: it is an extraordinary thing. Or the awakening of Brunnhilde. With Tristan and Parsifal I have a hard time saying which  I prefer but I think I love them both passionately!

C.D.: What was your first memory of Bayreuth and why do you think it is a unique and different experience?

F.D.: But it has already been said 100,000 times! The theatre is extraordinary, the sound comes out in a way that captivates you. That's what I felt immediately when I went there for the first time in 1976, invited by the President of the Wagner Society of Paris, Mercedes Bahlsen. After that, I went there every year. I also became a member of the Society of Friends of Bayreuth. I played often at Wahnfried, as well as at the Stadthalle.

C.D.: What do you mean by captivates?

F.D.: The way the lights go out, we prepare for something magical, we can't see anything, we can't see the orchestra and the music arrives suddenly, swells up. It's awesome ! We do not feel that anywhere else.

C.D.: What are your recent memories of Bayreuth?

F.D.: What enchants me is that there are always very good singers and conductors. Everything is of a very high standard, especially over the last few years, and I think that Eva Wagner-Pasquier is responsible for much of this. From this point of view, I am always delighted and convinced. In the same way, Katharina Wagner follows the same path of excellence, traced by their father, Wolfgang Wagner, for whom I had a great deal of admiration.

C.D.: How do you feel about Wagner's music, given that he did not compose for the piano?

F.D. As soon as I hear Wagner it's a moment of emotion that transports me to an unreal world, a starry dream. I also love Beethoven, Schubert, Schumann - a lot of German music, it's true, but also French music, Debussy and Ravel, not forgetting my dear Chopin too.

I also passionately love the music of Racine's verses, those of Baudelaire, and of Victor Hugo, whom I adore.

C. D.: Your training was somewhat special. In particular, you were a student of Alfred Cortot, whom you knew at the end of his career. How did you meet him? What was it like to be taught by him?

F.D.: I first entered the Paris Conservatoire in the class of Yvonne Lefébure. Then there were storms, as often happens in music. Then Cortot became very interested in me, and I had to choose. He had opened the room of the Ecole Normale de Musique in Paris to listen to me. I played Schumann's fantasy and Liszt's leggierezza, and surprisingly, he stopped smoking while listening to me! No need to say more! So I resigned from the conservatory to enjoy the last three years of his life, during which I learned so much with him. He lived in Lausanne, and I would leave Paris in the morning ... and come back again at night! I was playing in a real museum, in front of the famous portrait of Wagner by Renoir (which is now in the Musée d'Orsay), the manuscript of the sonata of Liszt and that of the lullaby of Chopin.

Practically every week my parents would wait for me at the end of the plattform. They would ask me how it had gone. I was not allowed to take notes because it would have taken too much time, so I tried to remember everything in my head ... and in my heart too.

When I was little I had said, while listening to Cortot playing the Symphonic Variations of César Franck: "I want to play with that gentleman! And that's it, the dream came true.

C.D.: What repertoire did he have you work on?

F.D.: I had the right to ask what I wanted. So, I asked ... for all his own repertoire! It was somewhat comical, because I had no common measure with Cortot. It helped me in the sense that I did the work very quickly, because we had little time, because he said he was old, he had little time left to live, and that I should learn well, and afterwards I would have the opportunity to review in detail what I had done with him. His classes lasted two or three hours.

Cortot spoke to me about an extraordinary pianist, that I had heard on the radio called Cziffra and he had charged me to go and congratulate him. I went to the Théâtre des Champs-Élysées and that's how, on Cortot's death, Cziffra shaped my work gracefully, just as Cortot had.

C.D.: What did it mean for you to stray from the institutional path of the Paris Conservatoire?

F.D.: Cortot showed me the way to emphasise certain phrases, the way to differentiate the timbres, the rubato which is a moment of freedom (always taking the rhythm with the left hand). I had an accident on my right wrist, which meant that I also taught at the conservatories of the City of Paris, where I was very happy as a teacher. I had a strong connexion with my students who have remained good friends with me.

C. D. What are your most iconic memories of your relationship with Cortot?

F. D.: The ones that he left me and that are extraordinary: the ring that Liszt had received from an admirer, which opens, and inside are locks of his hair (one lock from his youth, and another from when he was older). And then there are his two pianos: the Steinway which is in Paris, and the Pleyel, on which I played in Lausanne, which is in Dinard.

C. D.: Along with German culture, you have another passion, it's ...

F.D.: Italy!  This is crazy! Music, museums, the Italian public, the language that is familiar to me. This is my dream country!

F.D.: Yes, probably, and I think Wagner was very influenced by the city of Florence. He had thought to settle there. The bells of Parsifal were not only inspired by those of Siena (which is also a very beautiful city, although its dome is not as beautiful as that in Florence) but also by those of Florence, which sound a little cracked, as they do in the music. When I hear these, for me they are actually the bells of Parsifal. I like to go for a walk very late at night in the city. I was lucky: my first major concert abroad was in Florence. Indeed, I had also played at the Accademia Chigiana in Siena. And there, Cortot had said during his lectures, that the French should play especially well, because the Consul General of France would be present. When Cortot died, the Consul asked me to come and play in Florence, so I played on July 14 (for National Day) in front of 2000 people in the Boboli Gardens, under a huge spotlight illuminating the Palazzo Pitti cornice: it was prodigious, even if the keyboard was half lit! And I finished the programme with Debussy's prelude "Feux d’artifice" which ends with the Marseillaise.

C.D.: Finally, you had a career somewhat "on the sidelines". Could you also be a bit rebellious?

F.D.: I am very rebellious! Because it's also - a little bit - in my character. In fact, I have always been very well received abroad and much of my career was in Italy, in many cities. In the end, I was even chosen to play for the 150th anniversary of Italian Unity. I was very proud to play on this occasion, where I thought of Garibaldi. I do not regret not being part of the Paris circuit, because Italy and Germany have filled my life as an artist.

My parents always supported me: my father was a great architect, and my mother was from a family of musicians. They have always had one thought in minde: that I move forward in my art. They were delighted that I followed Cortot. It was the condition of my fulfillment. It was an extraordinary opportunity that I did not want to miss.

Finally, I'll let you know that Cortot said that I was "a Breton rock" - I was born in Dinard, Brittany - and that he would make paths to get there!

C.D.: Dear Florence, a huge thank you for sharing these insights into your art ...
Back to overview