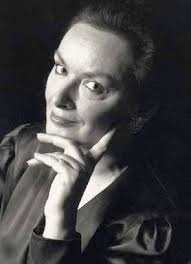 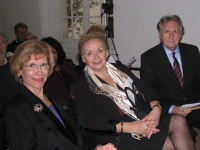 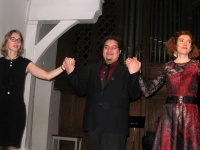 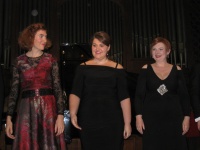 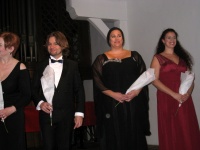 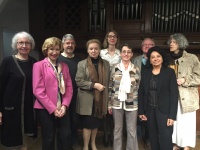 The first ever Wagner masterclass in Paris, held at the Schola Cantorum from October 23 to 26, 2017 led by Nadine Denize and Virginie Dejos was a great success.
The masterclass was the brain-child of Virginie Dejos, a former WS Paris Bursary holder, now working as a conductor and assistant music director at the Lubeck opera.  For several years, she had worked with the celebrated French mezzo-soprano Nadine Denize, who had considerable experience in Wagner roles and who was an excellent vocal coach.  At the same time, Dejos, through her own work with young singers had become aware of the need for potential Wagner voices to receive specialised coaching and assistance, along with opportunities to perform this music.  Bringing these two aspects together led to this unique event.

Dejos found ample support for her project - from the Cercle Wagner de Paris, who supported two of the singers, from singers based in Germany (four came from the Liszt academy in Weimar) who were eager to participate, from Opera magazine who would feature the event, and from Schola Cantorum who donated the use of its premises for the classes and for the final concert.

After four days of intensive coaching from Nadine Denize, the singers gave a concert of Wagner pieces from various of the operas.  This was well attended by an international audience, who were impressed and enthused by the quality of the performances.

Nadine Denize expressed her pleasure at the opportunity to host this masterclass, the first that she had given in the Wagner Fach.  She thanked the Cercle Wagner de Paris for their support in making the event possible and for their helpful organisation.  She also noted how delighted she had been by the exceptional students that took part and wished them all well for the future.

Madame Denize went on to note that few French singers had made a career singing Wagner, which was due, in part, to the difficulties of the language. As a child, she had lived in Germany and become fluent at the age of six which had doubtless helped her career at a later stage.  She also noted the need to become familiar with and even immersed in German culture (philosophy, literature etc.) in order to sing Wagner with the appropriate level of understanding.

This masterclass event proved to be a great success and it is to be hoped, one that will be repeated.  Perhaps in Weimar?