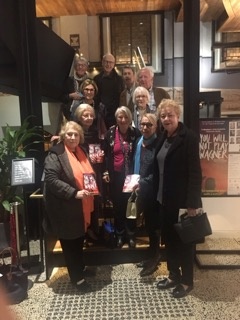 In May 2017 a play You Will Not Play Wagner by South African  writer Victor Gordon had its world premiere in Sydney. It shows the conflict between a wealthy patron of a conducting competition, a Holocaust survivor, and a young Israeli conductor who wants to conduct Wagner. The Wagner Society in NSW publicised the production and a number of members attended the production.

In September 2017, conductor Asher Fisch celebrated the 90th anniversary of the West Australian  Symphony Orchestra with 2 concerts of music by Richard Wagner which he believes is the greatest challenge for orchestras. In August 2018, he will conduct Tristan and Isolde with Stuart Skelton and Eva-Marie Westbroek in Perth.
Back to overview

San Francisco, USA
WS Northern California - The Development of Wagner's Leitmotives by Kip Cranna
learn more
Zoom Webinar
WS London - Kirsten Flagstad’s Most Unlikely Path to the Met with Paul Thomason
learn more
Vallejo, California
"The Greatest Wagner Concert Ever " in California
learn more
This website uses cookies to enable certain features and to improve the offer. By continuing, you agree to the use of cookies. More information.