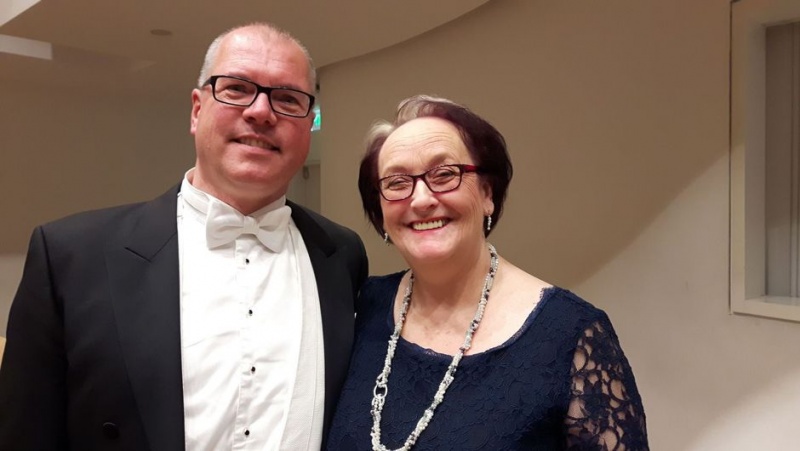 The Wagner Society of Ulm/Neu Ulm celebrated its anniversary in the Town Hall with a concert featuring young scholars and Heldentenor Stefan Vinke
Article published in e-paper SWP.de
author/copyright :  Jürgen Kanold 23.01.2018 (translated from the original German)

The first break followed after two hours and 20 minutes. Okay, you can't expect anything else when Wagnerians with their strong stamina give a concert. The first act of the "Twilight of the Gods" alone lasts for two hours. But this is not a good example, because on Sunday nothing ended and nothing was lost in the Town Hall, where the 10th anniversary of the Richard-Wagner-Verband Ulm/Neu-Ulm was celebrated.

The chairman Viola Lachenmann fulfilled a dream with this concert - and also received a "golden W", the highest award of the International Richard Wagner Association. Horst Eggers, the President of this umbrella organisation representing 22,000 members (the largest fan club of any composer in the world) had travelled from Bayreuth to attend the event. The Mayor for Culture Iris Mann also gave a greeting - along with Kay Metzger, the future Director of Theater Ulm, who hinted that "perhaps already" in his first season a Wagner opera would be performed.

The most important task of a Richard Wagner Association is to send scholarship holders to Bayreuth to generate a lasting interest in young talent in the work of this master craftsman in its original setting.

The festive concert began with performances by scholarship holders and was moderated by a scholarship holder, the Dramaturg Markus Tatzig. Wagner's works were not the only ones on offer: pianists Georg Michael Grau and Janis Pfeifer played works from Chopin to Debussy, trumpeter Marc Deml shone with "Carnival in Venice" by Del Staiger, soprano Miriam Galonska performed the "Song to the Moon" from Dvorak's opera "Rusalka". However this was followed by Don Lee, accompanied by Marcus McLaren at the piano performing the Daland aria "May you, my child", mezzo-soprano I Chiao Shih with a deeply glowing rendition of Erda's "Yield, Wotan, yield", Konstantin Krimmel with a noble and heartfelt performance of Wolfram's "Song to the Evening Star"  and Alexander Kiechle, an impressive sonorous bass with Hagen's "Here I sit on watch". They drew huge applause, and demonstrated their Bayreuth potential with their performances.

And then a contemporary Bayreuth star appeared: Stefan Vinke. He brought with him his wife, soprano Sabine Vinke - to perform the role of Elsa in the bridal chamber scene from "Lohengrin". When this Heldentenor sings Lieder like Liszt's "Im Rhein, im schön Strome", this reminds us, if I dare say so, of a twelve-cylinder engine in the Tempo 30 zone. Vinke needs the big stage, as he demonstrated clearly with his Lohengrin, which is why the opera houses of this world engage him above all as a Siegfried for the "Ring": because he  performs the gigantic role reliably and expressively, with full power and energy.