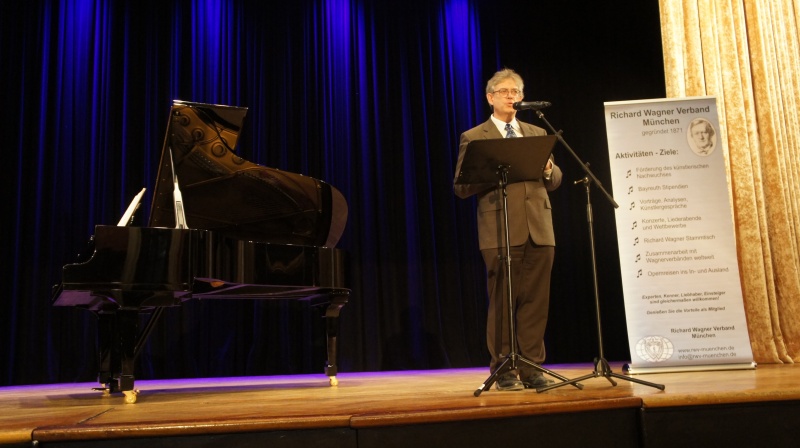 There was a great deal of praise for the recent successful event held by the WS Munich, comprising a lecture by Professor Borchmeyer & a recital given by Gerold Huber and others.
The WS Munich held an event within the framework of the Faust Festival, in which diverse musical, poetic and theoretical aspects  were presented.  The event comprised reflections of Goethe's "Faust" in the works, writings, letters, and Wagner's conversations and included a concert of both parts of Wagner's work "Faust Mirrors".

Little was known beforehand about Wagner's Faust songs and his Faust overture. Largely ignored and overshadowed by the master's widely known and celebrated mature musical dramas, these early works had remained in the shadows.

Prof. Dr. Dr. Dr. h.c. Borchmeyer has taken it upon himself to shed light on the darkness and works mainly on the Faust references in Beethoven's Ninth Symphony and on the influence of the Faust of the two giants Goethe and Beethoven on Richard Wagner's work.

To our great surprise we also witnessed a veritable premiere on this evening. Most of us had heard that Richard Wagner had transcribed the entire score of Beethoven's 9th symphony at a young age, in order to master it almost by heart, but the fact that he had created a complete piano score at the same time, which disappeared not long afterwards, had thus far escaped most of the audience of 160 at the event.

The real sensation lay in the fact that Gerold Huber - who was only scheduled to perform for the second part of the evening - seized the grand piano before the break and played part of the 3rd movement of this piano score as a Munich premiere.

The strong musical reduction of this version was particularly appealing and aroused curiosity about Part 2 of the event, the actual concert with all Richard Wagner's Faust compositions.

With gripping passion, Gerold Huber not only mastered the intricately difficult version of Bülow's "Faust Overture" from 1855 perfectly, but also knew how to transport to the back row of the Munich Künstlerhaus. all the mood changes and extremes of this work, originally conceived as the opening movement of an entire Faust symphony.

Last but not least came the Seven Faust Songs, performed by Gerold Huber and a group of four Bayreuth scholarship holders from Munich.  All of the young artists performed really well : Martin Summer, baritone; Sandro Schmalzl, tenor; Christian Lange, baritone and Dorothee Koch, soprano.  They excelled at not only the vocal parts of the songs, but also at Gretchen's melodrama as a dramatic recitation.  This rarely succeeds as it is mostly performed by actors rather than singers but was on this occasion in the very best hands of the soprano.