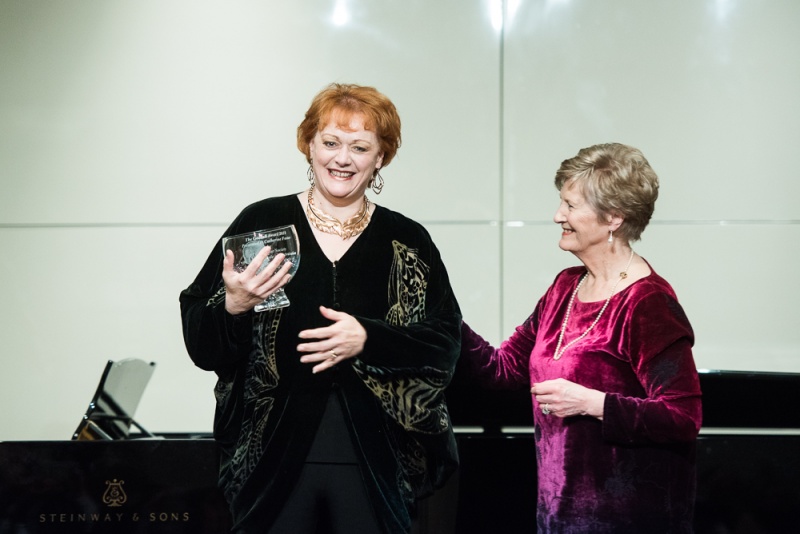 Every year the London Wagner Society presents an award named after Sir Reginald Goodall, past winners of which have included not only Reggie himself, but Placido Domingo, Sir Antonio Pappano, and Wolfgang Wagner.  This year the award was presented at the Society’s Annual Dinner, which took place on March 21st at the Royal Over-Seas Club in London, and the recipient was the British Br?nnhilde at Bayreuth for the last five years, Catherine Foster.  Catherine was in London with her husband and daughter to accept the award, which was presented by another noted Bayreuth Br?nnhilde, Dame Anne Evans.

Through the evening our guests were entertained with a champagne reception, followed by a three course dinner, cheese, brandy and a very very fine selection of wines.  As well as the presentation of the award itself, there was a recital by one the contestants of this year’s Singing Competition, Christian Adolph.  Christian was a firm favourite with the audience, and performed three pieces: Schubert’s Heimliche Aufforderung, Bella siccome un angelo from Don Pasquale, and the perennial baritone favourite O du mein holder Abendstern.

Following the presentation, Catherine then gave a short talk about her career, and opened up the discussion with questions from the audience.  This was a fascinating debate which, as she has been performing in the Castorf Ring which has divided tastes amongst everyone who has seen it, inevitably turned towards productions and directorial style.  Catherine gave a convincing explanation of her attitude to performing in the production, as well as the practical matters of working and performing in such a text driven work such as the Ring.  She told us that when she was married she smiled all the day, and for her singing Wagner was just like that.