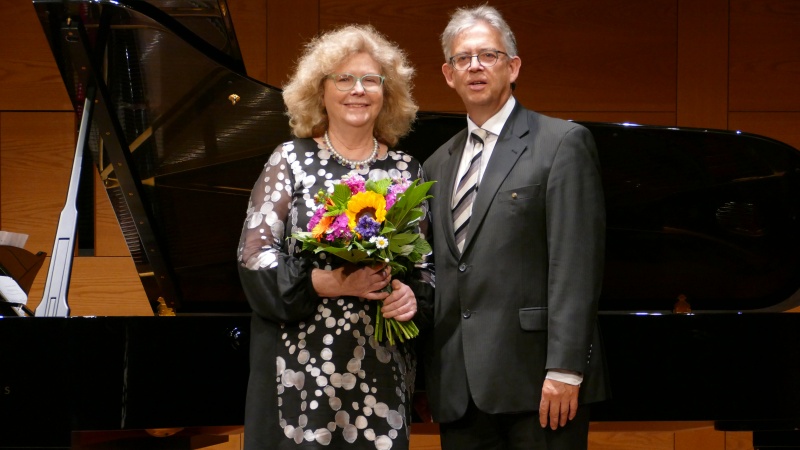 The WS Munich once again held its annual Scholars' concert in the Kleiner Konzertsaal in Gasteig. Eva Wagner Pasquier was present and received a special award
Raphaela Gromes (cello), Stephanie Richter (soprano), Galeano Salas (tenor) and Anna-Katharina Tonauer (soprano) were the young artists on stage, who demonstrated to the audience their impressive skills and gave indications of very promising future careers.

Julian Riem, an "alumnus" of this programme, had a great deal of fun playing the piano and accompanying the singers.

At the end of the interval, a special tribute was announced in the programme and none other than the well-known and popular Dr. Oswald Georg Bauer gave the laudatory speech.

Mrs. Eva Wagner-Pasquier had been offered honorary membership by the board of the Richard Wagner Verband München, which she had accepted with great pleasure.

In the presence of some of her close friends, her son Antoine and numerous members and friends of the Wagner Society, the former Festival director was addressed by a man, who, as Dr. Wolfgang Wagner's assistant had known her from childhood and had always followed her career with interest. Particularly noteworthy were not only the successful professional positions she had held in Germany and abroad, but also - as a result of this work - the awards she had received earlier, such as the Bavarian Order of Merit in 2016.

The Chairman of the WS Munich, Karl Russwurm, could not have wished for a better setting for this day and  not only saw his vision, to which the entire board had immediately agreed, put into practice, but was also able to experience what the promising new generation of artists had to offer on this special day.