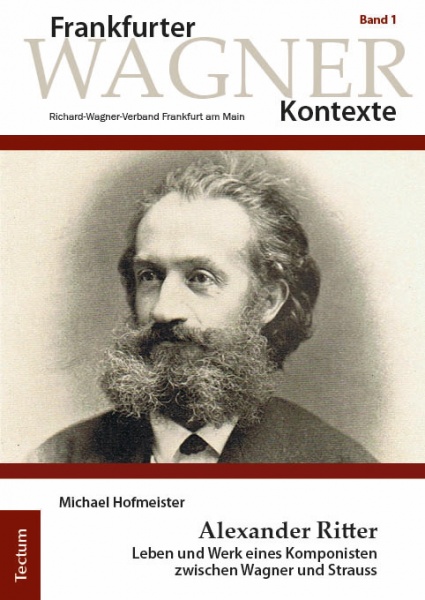 With the opening of the publication series'Frankfurter Wagner-Kontexte', RWV Frankfurt am Main expands its Bayreuth Scholarship Programme and also awards publication scholarships.

The new award of an annual publication grant (4,000 euros in 2018) will ensure a high-quality contribution to Richard Wagner research in Frankfurt in the future. The range of topics is deliberately broad. The only prerequisite for dissertations submitted for funding is that the work demonstrates clearly that it is within the context of the composer Richard Wagner. The opening volume is an example of this.

Author Michael Hofmeister (40) studied music and musicology in addition to singing at school in Würzburg. In 2006 he received a Bayreuth scholarship from the WS Würzburg-Unterfranken. This was followed by an international career as a countertenor. Later he completed postgraduate studies in "Historical Performance Practice" at the Hochschule für Musik und Darstellende Kunst Frankfurt am Main, where he also submitted his dissertation "Alexander Ritter: Leben und Werk eines Komponisten zwischen Wagner und Strauss" in 2017. This work, rich in every respect, is thus dedicated to a companion of Richard Wagner, who, like a number of other composers of the time, is threatened by disappearance in the oversized shadow of the Bayreuth master.

Since his childhood in Dresden, Alexander Ritter (1833-1896), whose mother Julie supported his idol in exile, had been influenced by Richard Wagner. He married Wagner's niece Franziska and built up a network close to Wagner with Franz Liszt, Hans von Bülow and Peter Cornelius, among others. Later it was he who guided the young Richard Strauss to Wagner.

It is to Michael Hofmeister's credit that he did not succumb to the temptation of a prominent name when choosing a topic for his dissertation. Rather, he closes a gap that Wagner and Strauss research has long ignored by introducing us to Alexander Ritter as a rigorous advocate of the new German direction. For the first time, the author evaluates all tangible sources and introduces the personality of Ritter to the reader. At the same time he takes him seriously as an independent composer and gives deep insights into his work, alas now completely forgotten.

Due to the numerous stations in Alexander Ritter's life, including Dresden, Leipzig, Weimar, Chemnitz, Meiningen, Würzburg, Munich, Berlin and Bayreuth, this opening volume stands for a composer's biography of national importance.

The new Frankfurt series is published by Tectum Verlag, which was founded in Marburg in 1992 and has been part of Nomos Verlagsgesellschaft in Baden-Baden since 2017 (C.H. Beck).

Orders can also be placed free of charge with Tectum Verlag:
http://www.tectum-verlag.de/reihen/frankfurter-wagner-kontexte.html

If you are interested in a lecture or a book presentation with our author, who lives in Munich, please contact Dirk Jenders at RWV Frankfurt.