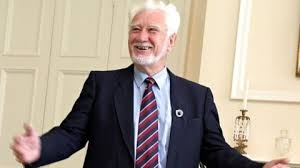 It all began on a late February afternoon in 2017, when Sir Donald McIntyre (‘Sir Don’ to the trade) with his wife Bettina visited New Zealand and paid a call on WSNZ Emeritus President Heath Lees and his wife Liz, the Society’s founding Secretary.

For some years now, Sir Don has been working on his memoirs, recounting how he had begun in Auckland as a complete amateur with a fine natural voice, and moving upwards geographically to the northern hemisphere’s operatic capitals.  Correspondingly, he also moved upwards professionally, to become the world’s Number One Wagner bass-baritone, with a reign lasting for more than two decades.  Not surprisingly, the memoirs are entitled “The Only Way is Up”.

Sir Don’s association with Heath went back a long way, right to the pre-founding of the Wagner Society in 1993, when Heath and Liz approached him to be the Society’s patron.  Typically, the answer was an immediate “Yes”.

A musical tit-for-tat took place when Sir Don asked Heath to introduce  him on the occasion of his Wellington investiture as a knight, and later to reply to his award as one of NZ’s very first Arts Icons.  So the links were  already there.

But this operatic knight had a sad tale to tell.  Despite the McIntyre name and the quality of the text, no Northern Hemisphere publisher would take it on, claiming that the book “would not sell”.   Could Liz and Heath help to have it published in New Zealand?

First advances were not promising.  Private publishers were interested, but wary.  Major university presses were approached.  Auckland and Otago gave the book a fair reading but regretfully declined.  Victoria University Press agreed to take it on, but then lapsed into months of silence until the McIntyres eventually withdrew.

Back to square one then?  Well, not quite.   In the meantime, Heath had been canvassing members of the Wagner Society and the Wagner-NZ Foundation with a proposal that the Society itself should publish the book with finance from the Foundation.  The committees of both organisations were contacted, and this time there was quick and unanimous agreement.

Then came stumbling-blocks.  National Secretary Peter Rowe examined the Rules of the WSNZ and found that publishing memoirs probably lay outside the Society’s stated objects. There were also thorny issues to do with resource and taxation since the WSNZ was just not set up to undertake the business of publishing and selling.

Off his own bat, WSNZ president Chris Brodrick, who has a long pedigree in printing and publishing, approached Quentin Wilson, a Christchurch book designer and publisher, who was keen to see the project happen.  Meantime, Heath had made a formal approach to the committee of the Wagner-NZ Foundation, for a grant of $10k towards publication.  The ready answer was again “Yes”.

It soon became clear though that Sir Don’s long and scintillating career had resulted in a huge collection of very fine production photos, taken from all over the world.  Cost was the problem here, since rights, scanning fees and search charges had escalated enormously

It also followed that the initial, somewhat basic book would have to be upgraded to quality paper, colour, and extra design features.  Quotes eventually came in, totalling about $30k. Back to the grant providers.  To their eternal credit, (and thanks to a great background paper from Chris Brodrick) the WSNZ committee agreed to support a further request for funds from the Wagner-NZ Foundation, now to the tune of $15k.

Heath’s next task was to approach another player on the grant-provision field:  the Auckland-based Sir Donald McIntyre Trust, which has for years been raising money in Sir Donald’s name and then gone about distributing it to young and majorly talented Wagner singers. The proposal was put for the Trust to match the Foundation’s $15k, and at the eleventh hour word came back in the form of yet another unreserved “Yes”.

After discussions with Chris Brodrick, Quentin Wilson and legal adviser Peter Rowe, a proposal was hammered out, Heath agreed to continue as the project’s NZ ‘manager’, and finally it was all good to go.  Hopefully, the book will be ready by 1 May, 2019, and officially launched on 22 May to mark Wagner’s 206th birthday and the 25th birthday of the WSNZ.

So that’s The Story So Far.  Sir Don’s fascinating, lifetime book has already gained a happy ending, and a bumper, double celebration is on the cards for May of next year.  Good news indeed.