Wagner networking at a height of 150 metres 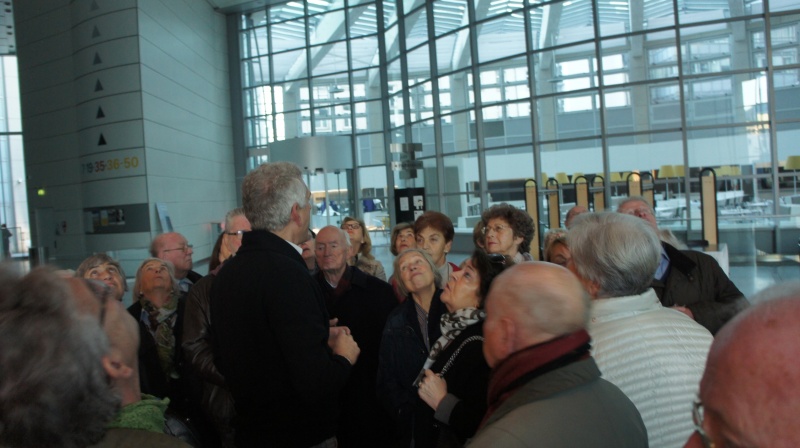 The WSs Munich and Frankfurt don't just talk about networking, they get on and do it as evidenced when the Bavarian Wagner friends visited the Hesse metropolis on the Main.
Very recently, Karl Russwurm (Chair of the WS Munich) regaled his members with a great review of 10 years of his society's opera and cultural trips.  No sooner was this over than they packed their suitcases to travel to Frankfurt am Main from 2 to 6 November. Their programme included Ariadne auf Naxos (Frankfurt Opera), Die Meistersinger von Nürnberg (Wiesbaden State Theatre) and a concert with the Berliner Philharmoniker conducted by Gustavo Dudamel (Alte Oper Frankfurt). In addition to these opera and concert highlights, their usual varied programme included ample opportunity for getting together with the Wagner friends of the WS Frankfurt.

Dirk Jenders (Chair of the Frankfurt WS) provided the guests from the Bavarian capital with impressive insights and views during an architectural tour of the high-rise Commerzbank headquarters. This, the tallest building in Germany, designed by Sir Norman Foster, measures 259 metres in height, extends over 58 floors and provides jobs for over 2,500 employees. When it was built over 20 years ago, great importance was already attached to high ecological standards. The nine interior themed gardens are particularly impressive. Each of these gardens embodies a different flora of the typical plant communities. So it was only natural that after the guided tour there was a champagne reception under olive trees (accompanied by cheerful robins) in the Mediterranean garden of the 35th floor facing south, which RWV Frankfurt hosted in honour of its guests. At the onset of the golden October evening, astonished glances were cast over the city and the countryside. Most of the visitors could hardly drag themselves away for the comfortable descent in the lifts for the communal dinner for members of the two societies that beckoned them.  This took place in the Römerberg, the renowned Frankfurt eatery.  Much to the pleasure of the two Chairmen, lively and friendly discussions developed immediately on all the tables in the winter garden of the Black Star, first mentioned in a document in 1453. Their discreet direction of the evening ensured that the tables sat a mixture of members from each society, thus facilitating an enriching exchange between all the enthusiastic Wagner fans. One would like to see more of these happy travel encounters between the associations.