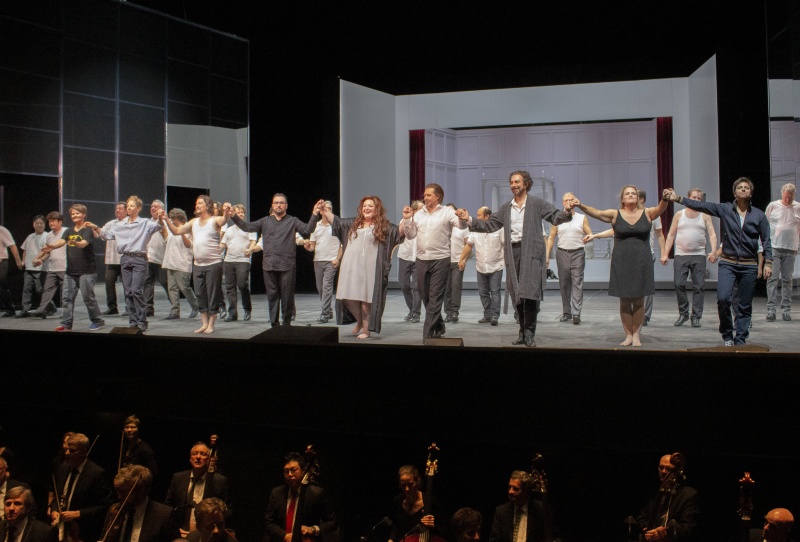 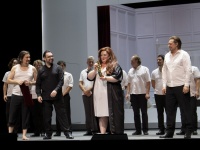 Kratzer's Götterdämmerung  was premiered on 15 October 2017 in the main house of the Badisches Staatstheater Karlsruhe.  The Faust Jury justified their award in the category "Best Director Music Theatre" thus: "Kratzer's Götterdämmerung at the Badisches Staatstheater Karlsruhedisplays a rare conceptual coherence and accuracy. Despite Wagner's heaviness, he succeeds in creating a lightness of staging that makes the music seem like dancing. His direction sprays with ideas that are never an end in themselves, but rather a combination of playful lightness and interpretative seriousness. By means of outstanding guidance of his singers, Kratzer achieves a tremendous intensity of performance. He reflects the opera genre on a meta-level without becoming self-referential and develops a character plot that shows us comprehensible people on stage. With this production Tobias Kratzer has succeeded in creating a strong setting, an absolutely independent statement."

General Director of the Badisches Staattheater Peter Spuhler and Director of Opera Nicole Braunger are delighted with this award: "This prize is absolutely deserved and a very special award due to the strong competition. The international interest at every Kratzer premiere in Karlsruhe makes it clear: Tobias Kratzer and his set designer Rainer Sellmaier have become one of the most important directing teams in European opera. Congratulations from the bottom of our hearts!

Tobias Kratzer was born in Landshut in 1980 and studied art history and philosophy in Munich and Bern as well as acting and opera directing at the Bavarian Theatre Academy August Everding. In 2008 he took part in the international directing competition the "Ring Award" in Graz and won all the prizes awarded during the competition.

Tobias Kratzer has been responsible for several highlights of Karlsruhe's recent opera history. These include the re-evaluation of Erkki-Sven Tüür's political opera Wallenberg in 2012, the spectacular interpretation of Die Meistersinger von Nürnberg in 2014 and the rediscovery of Giacomo Meyerbeer's The Prophet as a contemporary work in 2015. His last production for the Staatstheater wasd Mozart's Lucio Silla, the co-production of which with La Monnaie in Brussels will be performed in the 2019/20 season.

He has also staged productions at the Bavarian State Opera in 2009, the Leipzig and Graz Opera Houses in 2010, the Basel and Lucerne Theatres in 2011, the Estonian National Opera in Tallinn in 2013, the Opera in Nice in 2016, the Komische Oper Berlin in 2017 and La Monnaie in Brussels, the National Opera in Amsterdam and Oper Frankfurt (L'Africaine) in 2018.

The 2018/19 season will take Kratzer to the Deutsche Oper Berlin with Zemlinsky's Zwerg, to Halle with Zemlinsky's Florentine Tragedy and Mozart's Bastien and Bastienne, to Frankfurt Opera with Verdi's Forza del Destino and to the Bayreuth Festival with Wagner's Tannhäuser.