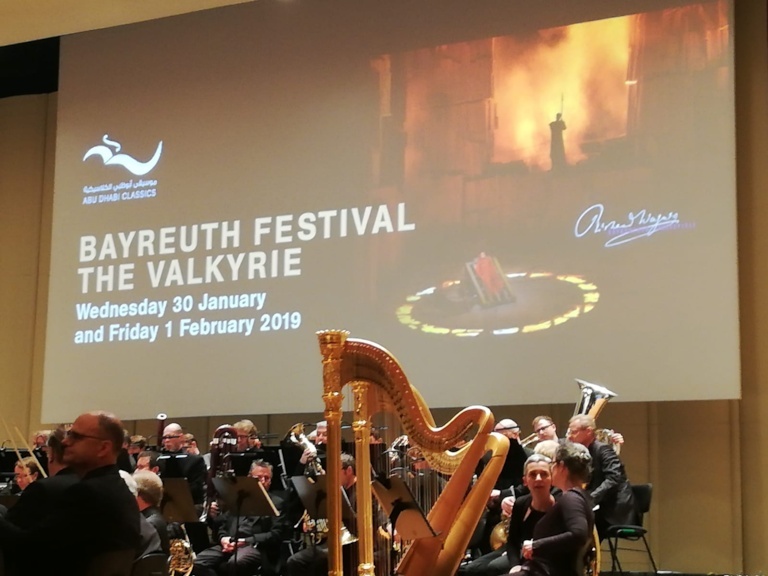 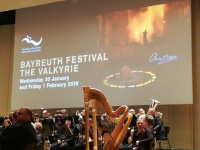 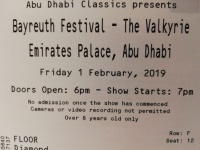 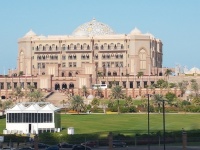 In March 2008, 435 German and French Wagnerians responded to the call of the then RWVI President Josef Lienhart into the desert of the United Arab Emirates. The Sächsische Staatskapelle Dresden under Fabio Luisi gave the first Wagner concert in an Arab country.

In January 2019, in the same place, the Bayreuth Festival with its managing director and Wagner's great-granddaughter Katharina Wagner performed "Die Walküre" twice. There were various attempts to organise trips for members of Wagner associations. In the end it was only the Richard-Wagner-Verband Leipzig with a group of 30 people, who, out of solidarity with the people of Bayreuth and out of deep solidarity with the main initiator, Minister of State Dr. Zaki al Nusseibeh, from 2014 to 2018 Chairman of the Board of Trustees of the Richard-Wagner-Foundation Leipzig, actually dared to undertake the adventure of travelling to Abu Dhabi/Dubai - and were not disappointed. WS Leipzig Chairman Thomas Krakow had already travelled there in 2008 and was able to draw comparisons.

Our Hotel Grand Hyatt, located directly opposite the performance venue Emirates Palace, was the first superlative experience. Indescribable. The city of Abu Dhabi followed, of course, unrecognisable after a gap of eleven years. A must is the third largest mosque in the world, named after the Emirate's founder Sheikh Zayed. This was followed by one of the wonders of the world created after the seventh, the Louvre Abu Dhabi. A breathtaking wonderset in the desert sand on the Persian Arabian Gulf. The exhibition concept is both exciting and perfect, so that the cultures of the world can actually meet here. It is a testimony to a responsible cultural policy, not only for one's own country but also for the sufficient financial resources available. And it seems more plausible, above all more natural to the visitor than in places such as Europe. The national interests of a country, its people and their culture are clearly safeguarded while respecting the cultures of the world. Here you can learn a lot from the Orient.

On the evening of 1 February 2019 we experienced the second performance of "Walküre" from the guest performance of the Bayreuth Festival with the Festival Orchestra and soloists. It was nice to stay in a hotel with all the artists and to have breakfast with the musicians of the Gewandhaus Orchestra. And it was grandiose. What nonsense did we read from and by the German media about the opening on 30 January? In fact, it was exquisite what was offered to the audience. No offside staging but a concertante performance with a really fitting film. The artists were in the best mood for it. It became a total work of art. Richard Wagner would have been delighted. In the end, everyone, including Katharina Wagner, was cheering. Interesting: For the design of all materials, pictures from Tankred Dorst's Bayreuth production, which was heavily criticized at the time, were used, not the last by Frank Castorff. At the end of the performance it was still human: Conductor Markus Poschner received a serenade from all participants on his 38th birthday.

The third day took us to the oasis town of Al Ain, on the border with the Sultanate of Oman. A town of 400,000 inhabitants, we saw the core, the actual oasis of the same name, where farmers mostly from Pakistan operate date palm plantations as tenants. Farmer Yakub showed us how to climb a palm in a flash to harvest or prune seeds. Before that we visited the fortress, in which a very interesting photo exhibition is located and also regularly large musical open air meetings take place, as well as the old palace of the state founder Sheikh Zayed, today a museum.

But the final highlight was a private reception of the group by Dr. Zaki al Nusseibeh in his private house. The Minister of State is the Spiritus rector of the Wagner performances in Abu Dhabi. He is one of the cultivated enthusiasts who are rarely to be found in Wagner associations today.

On the last day it was time to say goodbye to Abu Dhabi. But the region gave everything once again. It rained heavily, also on the trip to Dubai. For the children, that means no school, because that only happens four or five days a year. Rain in the desert - and we were there.

Then Dubai as a city of extreme superlatives, unbelievable. In terms of the number of skyscrapers, the city has long since overtaken New York. If you stay away too long, you won't recognize it. Palm Island - the next wonder of the world. A crazy Uzbek with a microphone for a YouTube project in front of the Bourj al Arab hotel in the form of a sail - great fun. And then the highest tower in the world - Bourj Khalifa. From above we saw almost unbelievable views. An old fortress as a view into the history of Dubai as well as the passage with the water taxi to the spice and gold market in the historic city of Dubai.