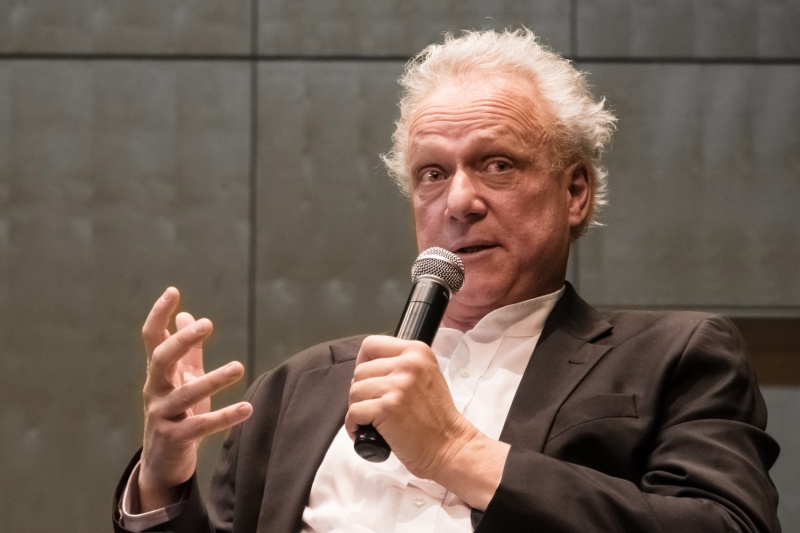 Johannes Martin Kränzle, principally known as a baritone is also a composer of merit. He and his work were celebrated by the WS Frankfurt at their recent prizegiving ceremony
On 17 February, Johannes Martin Kränzle was awarded the Rheingold-Prize of the RWV Frankfurt.  The occasion celebrated Kränzle the composer as well as the baritone. Kränzle had proved his compositional abilities early on in his career. As a high school student, together with a classmate, he wrote the comic operas Hexensabbat and Hera und Polyester; for which he won the Bavarian Theatre Prize. Respect for the great composers, however, prevented him from having any personal aspirations in this field. Kränzle, who had started violin lessons at the age of five, first began by studying music theatre directing along with the violin. His unusual baritone however quickly caught the attention of the Frankfurt University Choir, and this determined his professional future. “Martin Gründler played an outstanding role in my vocal development," reported Kränzle.

Kränzle is the third recipient of this prize, which was first awarded to Sebastian Weigle, General Music Director of the Frankfurt Opera, on the occasion of the 100th anniversary of the WS Frankfurt in 2010. In 2014 the Norwegian baritone Terje Stensvold was honoured with the award.

“You can see from our prizewinners what is important to us in awarding the Rheingold Prize: on the one hand, the WS FFM wishes to pay tribute to outstanding services in the interpretation of Wagner's music dramas, as Sebastian Weigle demonstrates so ably. On the other hand, we honour the ingenious fusion of outstanding vocal qualities with an intense, versatile and truthful portrayal of complex role characters, which we particularly appreciate in Johannes Martin Kränzle," said the Chairman of the WS Frankfurt Dirk Jenders at the award ceremony on 17 February 2019 in the Great Hall of the Dr. Hoch Conservatory.

“But it is also important for us to look beyond Wagner, as evidenced by Sebastian Weigle's commitment to the contemporary repertoire and the compositional work of the composer that we are honouring today.”

What motivates Kränzle to write music? “I need a commission," he says in conversation. Thus, in 2015 and 2016, the Lieder um Liebe (Songs of Love) based on poems by Bertolt Brecht came into being. Kränzle dedicated this piece to the mezzo-soprano Lena Haselmann, who also sang at the award ceremony; the two married in 2017.

Kränzle said that for some time he had not missed a single competition in this field and one can read that he entered many of them with success. He also owes another compositional work to this passion. In 1997 he won third prize at the composition competition of the Neuköllner Oper Berlin with the short chamber opera Der Wurm. Shorter compositions followed.

Singing however will remain at the centre of his creative work. The 56-year old, whose repertoire already includes over 120 roles, has a long “wishlist” on his website: among them 37 roles which he would like to prepare over again. Kurwenal from Tristan and Isolde is one of them. Otherwise, the Wagner interpreter, who is in great demand worldwide, makes no secret of the fact that while he greatly appreciates Richard Wagner's musical genius, he feels emotionally closer to other composers.

When you experience this singer-performer on stage, he clearly conveys his tremendous appetite for acting. Would he also like to direct one day? “Rather not”, says Kränzle; as for the director, a production ends with the premiere. For him as a singer, there is great attraction in honing the role with every new performance and tracking down other facets.

With this “Singer of the Year” in 2011 and 2018, the WS Frankfurt has now added a fourth honorary member to its ranks. The laudation was given by the Director of the Frankfurt Opera, Bernd Loebe. He also passed on congratulations to the prizewinner from a recent visitor to the Main metropolis, Sir Antonio Pappano, Music Director of the Royal Opera House in London: “tell him: he is the best!”

For the concert, Johannes Martin Kränzle gave the first ever performance of Hanns Eissler's Hollywood-Elegies, which he had arranged for string quartet. Mezzo-soprano Lena Haselmann then performed Kränzle’s 2016 song cycle Lieder um Liebe, based on texts by Brecht. The artist couple also sang two Kränzle arrangements of the Brahms duets Vor der Tür and Es rauschet das Wasser. All these pieces were accompanied by the Malion Quartet, young female musicians from Frankfurt and Stuttgart.  The programme was rounded off by a discussion moderated by Hannelore Schmid (Chair of the WS Frankfurt), highlighting the many facets of the artistic personality that is Johannes Martin Kränzle.