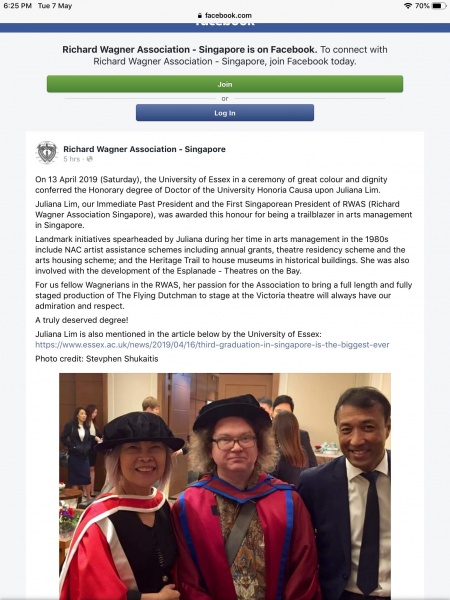 Juliana, former President of the Richard Wagner Association Singapore, was awarded the honour for being a trailblazer in arts management in Singapore.

Landmark initiatives spearheaded by Juliana during her time in arts management in the 1980's include NAC artist assistant schemes including annual grants, theatre residency schemes and the arts housing schemee, and the Heritage Trail to house museums in historical buildings.  She was also involved in the development of the Esplanade in Singapore - Theatres on the Bay.

Her passion for the RWAS to bring a full-length and fully staged production of The Flying Dutchman to stage at the Victoria Theatre will always be remembered with admiration and respect.

The RWVI Board received the following note from Juliana:

I feel very proud to share this accolade with you. I mentioned Wagner & our Flying Dutchman Opera three times in my acceptance speech - (1) as an example of a project of the highest professional standard by passionate volunteers; 2) that I was receiving the accolade on behalf of my Wagnerian friends and volunteers; and (3) exhorting young graduates, not to miss out, but  to make time to explore music by Mozart, Puccini and Wagner.

Thank you for your friendship and support over the years. - Juliana