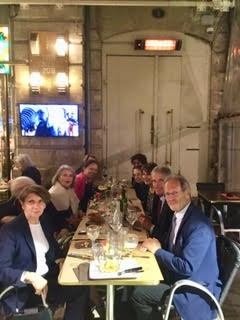 10 members of the Cercle Wagner de Toulouse visited Bordeaux on 23 May to see the production of Die Walküre at the Auditorium.
While the Auditorium in Bordeaux is not an especially interesting venue for opera (in contrast with the city's magnificent Opera House) it turned out to have an exceptionally good acoustic.

The space lent itself to a rather sober staging, making considerable use of videos, which were at times a touch overwhelming.  The three sloping platforms sufficed for the singers to communication the essence of the drama.

The group was impressed with the production, the singing and the orchestra and all agreed that the visit had exceeded expectations.

After the show the Toulousains gathered round a table in a nearby restaurant for an hour to relax among friends.