News from RW Association of Singapore 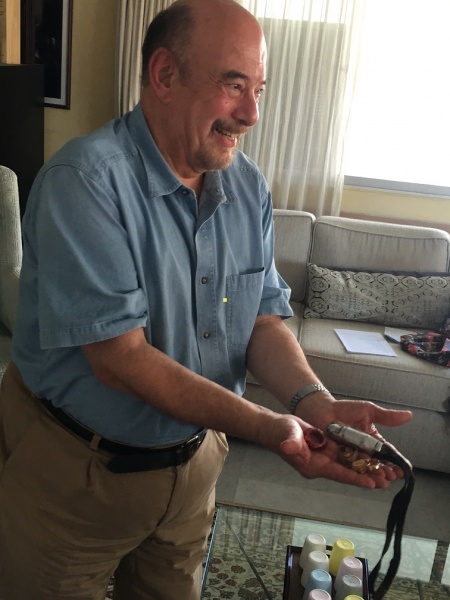 Singapore reports on a talk with Wagnerian singer Peter Sidhom and a profile of Jade Tan, their Bayreuth Stipendiatin for 2019
Photo of Peter Sidhom Peter showing the Rings from his various productions of the Ring Cycle, and Alberich’s severed finger, from the moment when Wotan took the Ring by force from him in the Covent Garden Ring
Photo of RWAS members with Peter Sidhom
Photo of Jade Tan, RWAS Stipendiatin 2019

“British baritone Peter Sidhom gave a highly entertaining talk to the association on August 18th, where he discussed the intriguingly complex and multifaceted character of Alberich in the Ring Cycle, a role he has performed many times, including opposite Sir John Tomlinson as Wotan at Covent Garden in 2007.  Peter covered many topics, such as the tension and parallels in the relationship between Alberich and Wotan,  whether Alberich is a villain or a victim, or a combination of both, and whether he deserves any sympathy. Peter also discussed various interpretations of the Ring Cycle, his depth of preparation for roles and how he developed his singing career. The event began with a video of Peter singing Alberich at the start of Act 2 of Siegfried in a Scottish Opera production, and ended with a wonderful live rendering of Alberich's curse on the ring from Das Rheingold. It was altogether a most fascinating and absorbing afternoon.”
--------------------------------------

Jade Tan Shi Yu is a young Singaporean mezzo-soprano who has already begun to make her mark in opera. She studied at the Yong Siew Toh Conservatory of Music and was honoured with the title of President’s Young Performer in 2016. In January 2020, she will appear in the Orchestra of Music Makers' production of "Die Walküre"

This year, the Richard Wagner Association (Singapore) nominated her for the annual Stipendien  programme at Bayreuth.  At our September gathering, she will speak about her Bayreuth experience and sing three Wagner pieces. Two - Fricka's aria from "Die Walküre" and Waltraute’s from “Götterdammerung” - are from the "Ring" cycle. The third is an early work, "Les Deux Grenadiers", composed in 1840 when Wagner was in Paris.

Jade will be accompanied by Elena Tuganova.