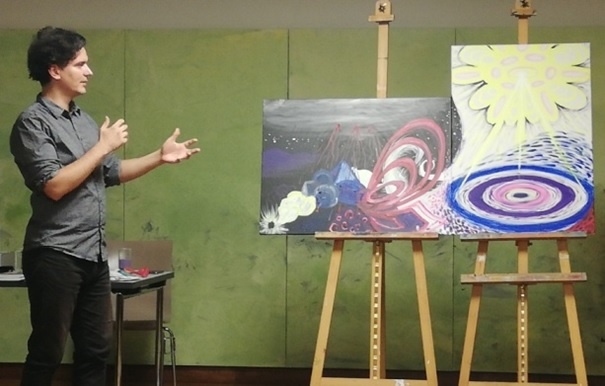 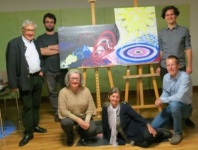 Thought, done! A similar event was arranged for Linz on site in the Bavarian capital. On 8 October the time had come. In keeping with the Bruckner Festival, Vladimir Kiseljov, already known to many Linz Wagnerians from international Wagner events and the Bayreuth Festival, painted a live painting of Bruckner's VIII, which was as monumental as Bruckner's Symphony.

The picture frames were prepared on two easels, a horizontal one on the left and a vertical one on the right. In contrast to the initial darkness and melancholy of the first movement, Kiseljov created a kind of light flower in yellow and white right at the beginning. A diagonally spreading beam of light, so to speak the principle of hope, was present from the beginning. The complex architecture of the first movement, its dynamics and tragedy, was symbolized with almost devouring lines. Even the spooky scherzo that followed was by no means reassuring with its unruly rhythm. Only the solemn Adagio, one of Bruckner's most intimate and peaceful slow movements, brought about the change. Kiseljov placed it in the form of concentric ellipses at the base of the adjacent picture. From here the sunlit light finally breaks its path in full luminosity, unsurpassably shaped by Bruckner in the radiant coda of the finale through the towers of all themes on top of each other.

After 80 minutes full of concentration and silence in the audience, the painting was finished and, after the artist had explained his inner overall view of the work and discussed it with the audience, it was given the title "From Darkness to Light".