Report on the successful Siegfried Wagner Symposium in Nuremberg 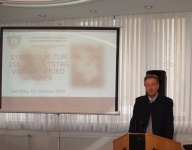 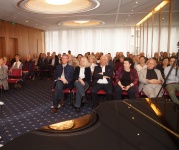 The RWVI was represented by Board Member and Chair of the WS Berlin-Brandenburg - Rainer Fineske, who wrote a report for our website.

Extracts from this report are below.

Ms. Sires opened the symposium with a refreshing welcoming speech and greetings from the Bayreuth Festival Director, Katharina Wagner, who not only described her grandfather  in terms of his lineage, but also as a distinguished historical personality who did not always find it easy to move through the political trends of his time in order to implement his ideas and principles for the further development and modernisation of the Festival.

Professor Dr. Julia Lehner, cultural advisor to the City of Nuremberg, emphasised Siegfried Wagner's complex historical and ideological connections opening the way to detailed discussions about the son of Richard and Cosima Wagner.

Günther Neumann, the theatre historian, musicologist and conductor, who was was Head of Lighting at the Nuremberg Opera House and the Fürth City Theatre gave a short lecture about Siegfried Wagner as an entitled: "Biographical information on the birth of Siegfried Wagner".

Professor Peter P. Pachl, the co-founder of the International Siegfried Wagner Society and a theatre historian and musicologist then gave a lecture at the symposium entitled "The Birth of Siegfried Wagner". "Lecture - Disturbed Feasts".

This year Professor Pachl created two staged performances of the opera "An allem ist Hütchen schuld" at the Markgräflichen Opernhaus Bayreuth during the Festival, which were attended by several visitors to Bayreuth.

Daniela Klotz dealt with Siegfried Wagner's complex of themes and his relationship to his father Richard Wagner. Her balanced analysis between father and son as well as her explanations of Siegfried Wagner's "experience of awakening" and the resulting disregard of his architectural studies in favour of dedicating his father's stage works in Bayreuth as stage designer, conductor and director, nevertheless allowed him to mature into an independent composer.

Dr. Sabine Sonntag's lecture was titled "Ich unfreiester Aller" Siegfried Wagner on the occasion of his 150th birthday. She is a director, opera dramaturg and author and has been teaching historical musicology at the Hochschule für Musik in Hannover since 2001.

Musical contributions were provided by of this year's WS Nuremberg Scholarship holder, the pianist Edita Hakobian. She played a fantasy by Siegfried Wagner from his opera "Herzog Wildfang" in an arrangement for piano by Eduard Reuss, in which she managed to subtly elaborate on Siegfried Wagner's compositional achievement for which she is to be congratulated.

Another musical performance was given by this year's Nuremberg scholarship holder, baritone Hyuoho Yoo. He sang the aria of Reinhart von Junger Liebe from the opera Duke Wildfang op. 2 by Siegfried Wagner, accompanied at the piano by Professr Werner Dörmann.

The singing and indeed the symposium concluded with the dramatic soprano Rebecca Broberg who sang the "Scenes of the Osterlind" from Duke Wildfang op. 2 by Siegfried Wagner, accompanied on the piano by Professor Dörmann.

All told, this was a wonderful event.