RWV Hannover - An Evening of Richard Wagner and Giacomo Meyerbeer in the Villa Seligmann, the House for Jewish Music in Hannover
Report on the lecture and song recital on Richard Wagner's relationship to Giacomo Meyerbeer on 26.05.2022 at the Villa Seligmann, Hannover
What has Richard Wagner got to do with a house for Jewish music? Eliah Sakakushev-von Bismarck, managing director of the Villa Seligmann, gives the answer right away in his welcome address: Wagner's music is also loved by many Jewish musicians. In the greetings, Mr. Rainer Fineske, President of the RWVI, and Prof. Eva Märtson, Honorary Chairwoman of the RWV Hannover and former President of the RWVI, are especially welcomed as guests of honour. On this occasion, the Chairman of the Hanover Association, Thomas Winiarski, appealed for donations for the Ukraine project (support of scholarship holders of the sister associations) of RWV Hanover.

The deeper reason for this evening is another: one which is still rather the exception internationally: the cooperation of a Jewish cultural institution with a Richard Wagner association. Here in Hanover, we are daring to do this. As so often in the history of Richard Wagner associations, the RWV Hannover is once again taking on a pioneering role here. The project had been planned for a long time but had to be postponed for almost two years due to the pandemic. The theme of this unusual cooperation is the relationship between Richard Wagner and Giacomo Meyerbeer.

In his lecture Herr, Dr. Frank Piontek spoke about how the famous Meyerbeer supported the young Wagner and how Wagner later turned against his patron - especially in the infamous essay Das Judentum in der Musik. Many well-known along with hitherto unknown details were explained by "Pio", as many Bayreuthers call him, with his considerable background knowledge as a cultural publicist.

Several participants were not hitherto aware that the Seligmann couple were among the founding members of the Hannover Wagner Association in 1910.  The chairman of RWV Hannover, Thomas Winiarski, also reported on the generosity of the Seligmanns, who donated almost the equivalent of the monthly salary of a worker in the founding year alone. He presented Mr Sakakushev-von Bismarck with the annual report of 1910, which shows almost all the sponsorship given by important men and women of the Hannover association at that time. During the break, RWV Hannover invited the visitors to a glass of sparkling wine in the garden of the villa.

The subsequent song recital, which was moderated by Paul Weigold, the artistic director of RWV Hannover, was performed by the mezzo-soprano Esther Choi and the tenor Pawel Brozek, former scholarship holder of RWV Hannover. 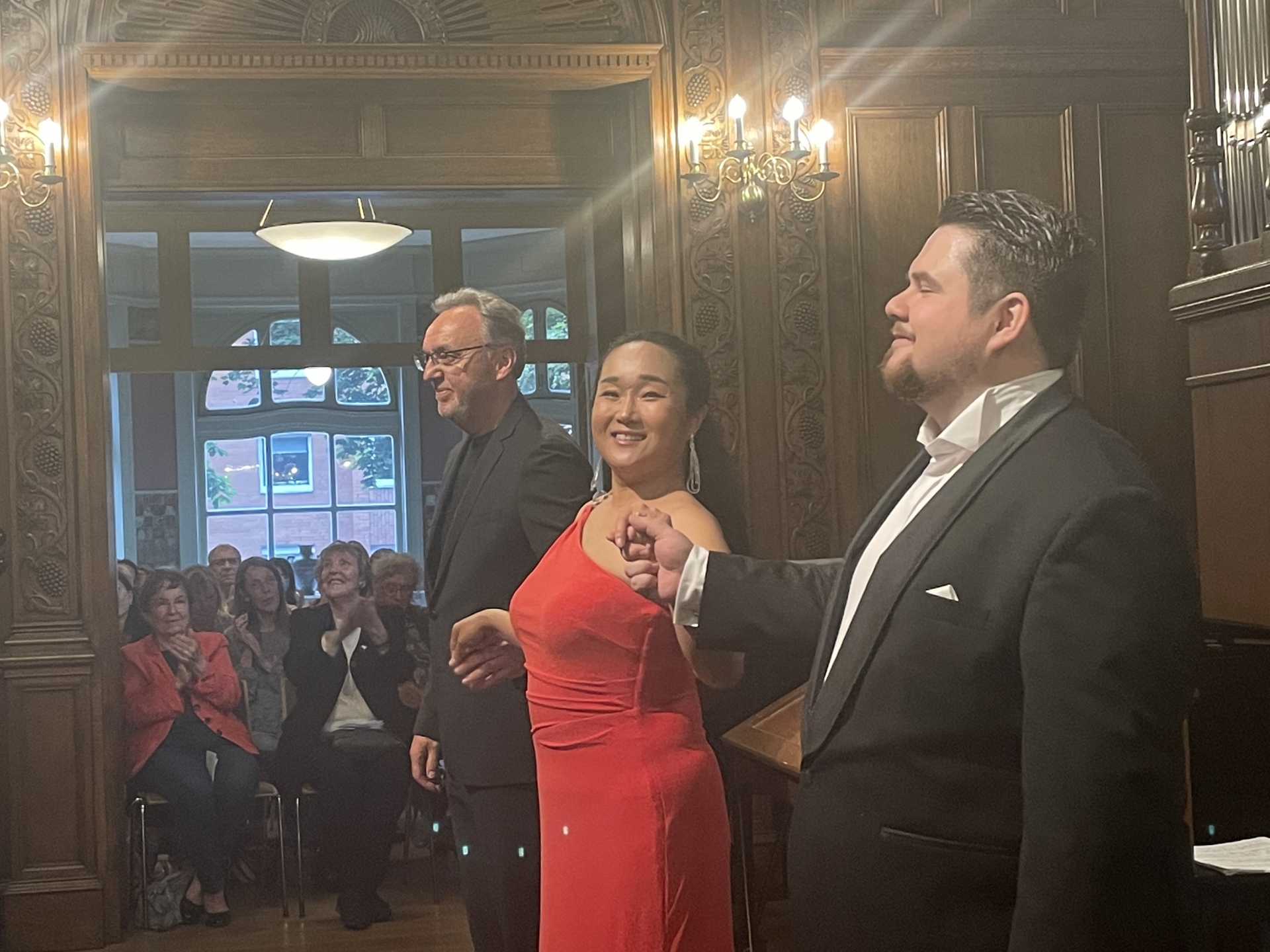 Songs by Meyerbeer and Wagner, composed for the Paris salons, were performed to impressive effect in the intimate setting of Villa Seligmann. Early Italian songs by Giacomo Meyerbeer formed the starting point. This was followed by compositions to French texts from around 1840, of which the elegiac scene Le poète mourant by Meyerbeer was particularly noteworthy, performed by Pawel Brozek with haunting emphasis and with a passionately melting tenor rendition. Esther Choi impressed in the following Wesendonck Lieder by Richard Wagner with deeply felt expression and the multi-faceted, rounded sound of her voice. Three songs by Giacomo Meyerbeer for tenor after texts by Heinrich Heine rounded off the programme. The encore was the Serenata by Gioachino Rossini, which both artists performed as a duet. Paul Weigold accompanied the programme impressively and sensitively on the orchestra's own Steinway.

The end of this very successful and sold-out event on Ascension Day was marked by lengthy applause..

One thing is certain for both cooperation partners: more events will follow.