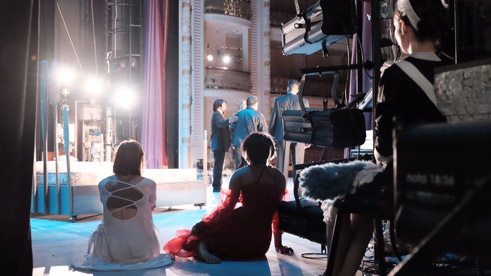 Richard Wagner in socialist Cuba? Not a good match, or is it? Read on, to find out more....
Photos: Andreas Schiekofer

To read a full report (in German) on the event from Karl Russwurm, President of the WS Munich, whose dedication, energy and commitment went a long way towards making this event happen, click here.

The article below is from a review in the Goethe Institute's online magazine.

Richard Wagner in socialist Cuba? Not a good match, or is it? Things have been changing in the island state lately and the German composer is also becoming more popular there. With help from the Goethe-Institut,Tannhäuser has now come to Havana.

Barack Obama had only just left Havana when the next infrequent guest arrived in Cuba’s capital city: Richard Wagner. This visit may not be quite as historic as the first visit by an incumbent US president in 88 years, but performances of Wagner operas in socialist Cuba are by no means common. Operas were not welcome under Fidel Castro. And when any were put on before the country began opening its borders, they were the Italian classics. But today opera is quite popular. This Saturday, Wagner’s Tannhäuser premiered in the Alicia Alonso opera house in Havana.

The project in question, called Tann(z)häuser, is actually far more than an opera. It is a blend of dance, opera and visual art. It was mounted by the Goethe-Institut liaison office in Havana together with the Teatro Lírico Nacional de Cuba opera ensemble, the Danza Teatro Retazos company and the International Association of Wagner Societies. The artists involved come from Cuba, Germany and Austria. The production is directed by the German Andreas Baesler and conducted by the Austrian Walter Gugerbauer. They received support from the artist Kcho who came to fame with installations made of ship parts. The stars on stage are the young Cuban singers Johana Símon and Marcos Lima and members of Danza Teatro Retazos.

Last year, a dream came true for Símon and Lima: they received scholarships to work on the Green Hill in Bayreuth. Opportunities like this are particularly crucial for young Cuban opera singers since they have very few in their own country. Cuba has hardly any conductors and directors dedicated to opera. Opera-loving Germany is therefore an important partner and supporter. Before Wagner, the small repertoire of works from German-speaking composers was expanded with Mozart’s Zauberflöte and Hans Werner Henze’s recital El Cimarron.

And in the end, the orchestra, chorus, dancers and soloists were visibly proud of their Tannhäuser, as the audience showed their agreement with standing ovations. The concert competition this weekend in Havana was quite considerable. “Los Rolling” – otherwise known as the Rolling Stones – were also performing on the island.

“The Goethe-Institut did what it does best,” said Andreas Schiekofer, head of the liaison office following the premiere, “Bringing people together who recognize the extra value of dialogue.” This usually bears the best fruit in today’s Caribbean and in Cuba. “Cuba danced to Wagner and Wagner arrived in Cuba.”

Tannhäuser was the first Wagner production ever in the Alicia Alonso opera house. But Wagner’s Caribbean adventure actually began a few years ago when, in late 2013, the opera Der Fliegende Holländer premiered – in German – in Havana. Those involved were largely the same as for this latest project. The production was a huge success. A few dozen Wagner fans even travelled all the way from Germany to experience the spectacle.