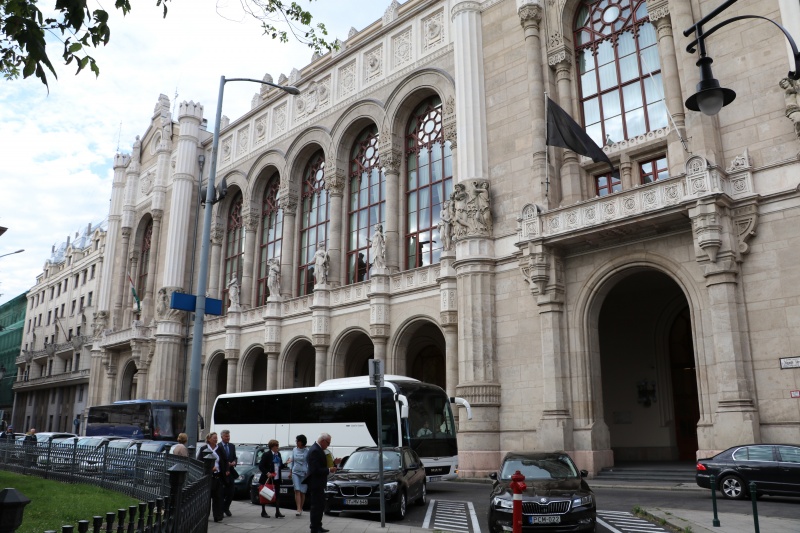 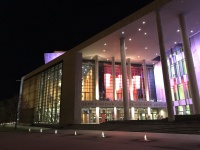 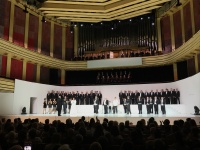 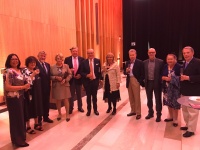 The 2017 Wagner Congress in Budapest proved to be highly successful and enjoyable.  Our hosts, the Wagner Society of Budapest, did us proud with a wonderful programme of events, showcasing not only their phenomenal concert hall, Mupa and their glorious 19th century gilded opera house, but also the extraordinary quality of the musical scene in Hungary.  Several highly talented young artists performed for the delegates in two concerts, along with the famous and established conductor, cast, chorus and orchestra for one of the most thrilling performances of Parsifal in recent years.  The complex, dark and psychologically challenging Bluebeard's Castle, along with the unsettling Mario and the Magician made for a thought-provoking evening at the opera.  This was a very well thought-out and varied cultural programme.

The tours showcased the fascinating history and extraordinary beauty of the city and its unique architecture.  And finally we have to mention the wonderful coffee and cakes (some of the best in the world -to rival those in Vienna) and the other culinary and oenological delights that we were privileged to sample.

Thank you Andras Bajaj, Krisztina Hudomel and your team for a highly memorable time in Budapest.

Reports on the opening ceremony and the Annual Delegates' Meeting can be found below.

In his opening remarks, RWVI President Horst Eggers from Bayreuth, noted that every year the Congress of the great Wagner community from all over the world, currently comprising 125 Wagner Societies, affords a unique opportunity to meet like-minded people and to exchange ideas in an appropriate cultural environment with the aim of arousing and expanding knowledge, understanding and appreciation for the works of Richard Wagner.

President Eggers also pointed out that the Richard-Wagner-Verband International (RWVI), when deciding on the congress venue in any particular year, acts in a neutral fashion according to its mandate as a worldwide association, and does not presume to comment on political events in the countries of its member societies. Regarding the current situation in Hungary the President stated: "It is our duty to promote the works of Richard Wagner in the context of the mutual influence of art and its liberal development!"

Mr Eggers also referred to the long-standing Wagner tradition in Budapest, looking back on its close relationship with the composer. This was due in no small way to his friend and patron, the composer and pianist Franz Liszt, who would later become his father-in-law.

Richard Wagner came to Hungary for the first time in 1863 and gave two concerts in the National Theatre, which were triumphantly acclaimed by the audience.  On his second visit, Wagner and Franz Liszt conducted together at a concert on March 10, 1875, in this Redoute Hall, where our opening ceremony took place.

Shortly after the Second World War, in 1948, extracts from Wagner’s Lohengrin were performed in Budapest in Hungarian under the baton of the conductor Otto Klemperer.

In 1958, 1959 and 1967, the Hungarian Heldentenor, Sándor Kónya, performed the role of Lohengrin at the Bayreuth Festival. This was one of his finest roles, and earned him his breakthrough at the Metropolitan Opera in New York.

Horst Eggers then extended a special welcome to the joint patron of the Congress, Professor Eva Marton, who has long been acclaimed internationally as a star Wagner performer. Her performances of the dual roles of Venus and Elisabeth in the Götz-Friedrich production of Tannhäuser at the end of the 1970s became legendary.

Horst Eggers also welcomed the representative of the Wagner family and Ambassador of the Bayreuth Festival for the Wagner Societies, Mrs. Eva Wagner-Pasquier.

Finally he gave a special greeting on behalf of all the Congress participants to the Chairman of the Richard Wagner Society of Budapest Mr Andras Bajai for his work in organising the event.

In the name of the International Richard Wagner Congress, the Annual General Meeting of the RWVI takes place every year for the 125 member societies.

4) The approval of the Annual General Meeting was requested for this purpose.

"Keyword Wagner" in Reykjavik from 01.06.-06.06.2022
The motto of this year's "Stichwort Wagner", actually already in 2020, was: Richard Wagner and Iceland.
learn more
WS Iceland - Keyword "Richard Wagner and Iceland
RWV Iceland hosted a very successful and entertaining keyword with representatives of Wagner associations from Europe, Africa and the USA
learn more
WS Stockholm 50th Anniversary 21/22 May 2022
Report from Rainer Fineske - The Svenska Wagner-Sällskapet Stockholm celebrated on 21 and 22 May 2022, Richard Wagner's 209th birthday
learn more
RWV Hannover - An Evening of Richard Wagner and Giacomo Meyerbeer in the Villa Seligmann, the House for Jewish Music in Hannover
Report on the lecture and song recital on Richard Wagner's relationship to Giacomo Meyerbeer on 26.05.2022 at the Villa Seligmann, Hannover
learn more
Update from the Leipzig Wagner Festival
The Leipzig Opera Festival WAGNER 22 is approaching, a worldwide unique undertaking of cyclical performances of all 13 of Richard Wagner's staged works
learn more
This website uses cookies to enable certain features and to improve the offer. By continuing, you agree to the use of cookies. More information.