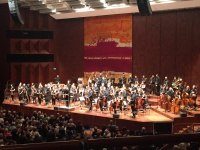 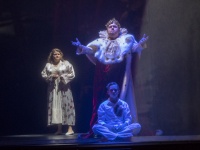 2018 saw the annual Congress take place in the glorious mountain scenery of the Tirol, Austria.  Hosted by the Wagner Society of Innsbruck/Bolzano and expertly organised by a team led by Dr. Ekkehard Kappler, President of the Society, the attendees experienced a delightful cultural and educational few days, enhanced by superb local culinary and oenological offerings.

The event began with a performance of Oscar Straus's Merry Nibelungs at the Innsbruck Conservatoire.  As ever, this was a great delight and was performed with wit and enthusiasm.  Just the thing to put all the delegates in the right mood for the delights to come.

The opening ceremony was held in the spacious surroundings of the Innsbruck Congress Centre.  Following the opening speeches from RWVI President Horst Eggers, Ambassador to the Bayreuth Festival Eva Wagner -Pasquier,  the Tirol Landeshauptmann Frau MdL Barbara Schwaighofer, the Mayor of Innsbnruck Bürgermeister Georg Willi. and Dr. Ekkehard Kappler, President of the WS Innsbruck-Bolzano, the delegates enjoyed a fine concert of works performed by local young artists.  This was followed by a superb buffet (the first of many fine meals featuring Austria's showcase cuisine), giving everyone a chance to greet old friends and to make new ones.

All the events described below were augmented by various tours on offer to visitors to interesting and unusual local attractions such as the Hofburg, the Hofkirche (with the empty tomb of Hapsburg Emperor Maximilian and the stunning bronzes), the Bergisel (Winter Olympics ski jump designed by the late Zaha Hadid) and Schloss Ambras (a superb Habsburg residence with an impressive collection of armoury and a "chamber of wonders" featuring all sorts of bizarre knick-knacks).

The following day began with the Annual General Meeting of the RWVI.  There were around 70 attendees present, representing Wagner Societies from Germany, Austria, France and a few other countries.  The agenda contained no contentious items and the meeting was content to endorse the President's report, the annual accounts, the Auditors' report and the exoneration of the Board.  Reports were received from Dr. Stefan Specht of the Scholarship Foundation, who also brought greetings from the Mayor of Bayreuth, who was unable to attend.

Several Golden W awards were presented to Society Presidents who had been in post for 10 years, and all new Presidents were named, with those present making themselves known to the delegates.

Professor Alessandra Althoff-Pugliese gave a brief introductory presentation on the much-anticipated 2019 Congress in Venice and was able to distribute the first, hot-off-the-press flyers for this event.  You can find out more about the dates and the provisional programme at the top of this Congress web page.

Board member Dr. Matthias Lachenmann gave a brief update on the European Data Protection laws, informing members that further information and guidance was available on request.

Any other business included an invitation to attend the Wagner Congress in Bonn in 2020, the forthcoming Keynote Wagner symposium in Munich in March next year, the annual Singing Competition in Karlsruhe in September of this year, the Ring in Minden in 2019 and various other Wagner productions taking place around the world.

The meeting was followed by a trip to Erl to experience a rehearsal of  Act 3 of Tannhäuser at the Festival House, followed by yet another excellent culinary pause and ending with a superb Wagner concert given by the Festival Orchestra conducted by Gustav Kuhn.   A most enjoyable evening was had by the many delegates who attended.

The penultimate day began with a symposium on Stockhausen and Wagner, which was very well attended by the German speaking delegates, and featured two knowledgeable speakers.  A very lively discussion ensued to the satisfaction of all present.  The evening featured a performance at the Tiroler Landestheater of Rienzi, directed by Johannes Reitmeier and conducted by Lukas Beikircher.  The role of Irene was sung by Josefine Weber, a former Scholar of the Munich WS much to the pride and satisfaction of the several delegates from that city who attended (see photo).

Congress 2018 ended with a very fine concert in the Congress Centre, featuring the University Orchestra in its final offering of the season and soprano Sophia Pisching.  Works by Bellini, Wagner and Bruckner were performed.  The ensuing meal in the Innsbruck Fair gave attendees the chance to bid farewell to one another and to the beautiful city that had hosted this fine 2018 International Wagner Congress.  President Horst Eggers spoke for all of us when he offered his profound and sincere thanks to Dr. Ekkehard Kappler and to his colleague Barbara Gottardi for the wonderful and highly efficiently organised event.

THE CONGRESS WAS ALSO ATTENDED BY SPECIALIST WAGNER JOURNALIST AND REVIEWER KLAUS BILLAND, FROM VIENNA'S ONLINE AND PRINTED MAGAZINE DER NEUE MERKER
You can read his full report online (in German) here.  The printed version will be available in mid-July 2018.

WS in Victoria - Newsletter
An excellent and informative offering from the Wagner Society in Victoria
learn more
Badisches Staatstheater to present livestream of the opera "Wahnfried" on Sunday 28 June
This popular new opera by Avner Dorman won great acclaim when it originally played in the theatre in Karlsruhe.

learn more
WS Northern California initiates a series of Webinars
?The Wagner Society of Northern California has begun our series of webinars on June 6th and continue with a webinar on June 27th 1:00 p.m. Pacific Time.
learn more
Update! Wagner Society New York to present its seminar on Der fliegende holländer as a Webinar
New York are joining many enterprising Wagner Societies in streaming their seminar that was originally planned for March
learn more
Wagner Masks to keep us safe
An enterprising Wagnerian is making Wagner masks for sale so that we can proudly display our affinity

learn more
This website uses cookies to enable certain features and to improve the offer. By continuing, you agree to the use of cookies. More information.