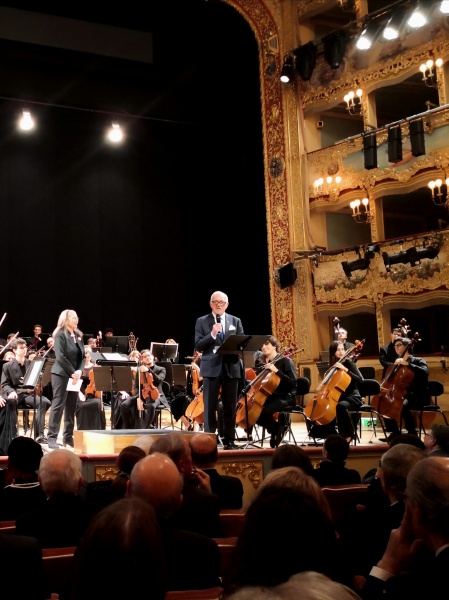 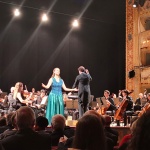 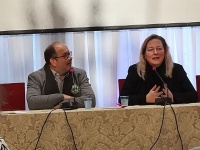 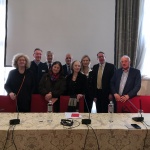 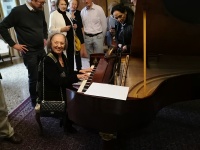 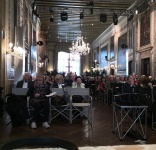 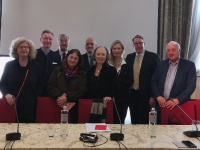 This year’s Congress broke the mould in many ways, affording its participants unique and unforgettable experiences in the magical setting of La Serenissima – with concerts in peerless surroundings (La Fenice, Ateneo Veneto, the church of San Vidal), a fabulous production of Don Carlo at La Fenice, dinners in classical Venetian splendour (Ca’ Vendramin Calergi, La Fenice, Palazzo Pisani) and tours highlighting the mysteries of the city itself and highlights of the extraordinary art it contains. Once again we were able to enjoy the pleasurable annual opportunity to meet with Wagner friends old and new and to join in celebrating our mutual passion for the Master and his works.  Congress should feel like a warm family gathering, and this one certainly did!

We began with a fine concert at La Fenice, at the outset of which outgoing President Horst Eggers noted the strong connection between the composer and Venice (the city of his death) and welcomed the many participants and our special guests Katharina Wagner and Eva Wagner-Pasquier.  He drew attention to the special relationship of Venice with the Bayreuth Festival that was initiated by Professor Giuseppe Pugliese, former Chair of the Wagner Society (RWA) Venice and Dieter Mronz, former Mayor of Bayreuth.  This Congress was a testament to the durability and closeness of this relationship.

The Congress was honoured that both Katharina Wagner and Eva Wagner-Pasquier were both able to attend, and indeed stayed for the full length of the Congress.

Fortunato Ortombina, Sovrintende of Teatro La Fenice, where so many fine events would be held over the coming couple of days, then gave a welcome speech to the participants.

The concert, entitled “Concerto per Cosima” featured a fine performance of Wagner’s lesser known Symphony in C Major performed by the Orchestra del Conservatorio Benedetto Marcello di Venezia, under the baton of the talented young conductor and pianist Levente Kalman Török, a former Bayreuth Scholar 2015 of the ARW Venice and now first Kapellmeister of the Oper Ulm.  This symphony was conducted by Wagner (in what would be his final appearance as a conductor) and was performed in La Fenice on Cosima’s 45th birthday as a surprise present to her.

The following morning the Presidents of our member societies and their nominees gathered for the annual Delegates’ meeting of the RWVI, which was attended by 105 delegates with voting rights, along with a number of non-voting attendees.  The meeting took place in Ca’ Vendramin Calergi.  As the present Board had fulfilled their five-year term of office, it was time for the election of a new Board.  Following the presentations of the Golden W to long-standing Presidents of Wagner Societies and the introduction of new Presidents, along with the usual reports from the outgoing President, Treasurer, Auditors and Director of the Scholarship Programme the elections were duly held.

We began with the election for President, for which their were two candidates.  Following a short presentation by each, the voting took place with the winner declared as Rainer Fineske.  Elections for the rest of the Board then followed and the results can be seen on our website.

Later that afternoon a symposium “A Tribute to Wolfgang Wagner 1919-2019” was held in the same venue’.

The first part comprised a lecture by Dr. Oswald Georg Bauer, the author of „Die Geschichte der Bayreuther Festspiele 1850-2000“ (Deutscher Kunstverlag 2016), who gave a deep insight into Wolfgang Wagner’s work for the Bayreuth Festival, as both overall Director and as a stage director.  Dr. Bauer had been a close collaborator of Wolfgang Wagner from 1976 onwards.

Dr. Bauer‘s lecture was followed by a lengthy  conversation between Katharina Wagner, the current Director of the Bayreuth Festival and the journalist Manuel Brug (from Die Welt), during which Katharina talked openly about her relationship with her father and about growing up in the Festival milieu.

The evening concluded with a concert at La Fenice “Amore e Morte a Venezia”  where extracts from Wagner’s diaries were read aloud by an actor focusing on scenes from the two great operas of love and death, Die Walküre and Tristan und Isolde, parts of which had been composed in Venice.  Young singers with emerging careers performed the scenes, (including Daniela Köhler, Bayreuth Scholar Karlsruhe who will sing Brünnhilde in Siegfried in the new 2020 Bayreuth Ring) accompanied on the piano by the conductor, Levente Kalman Török.

The following morning delegates had the opportunity to attend the formal opening of the exhibition “Richard Wagner: l’ultimo soggiorno..” in  the Richard Wagner Museum in Ca’ Vendramin Calergi, housed in the very rooms where he lived during his last visit to Venice and where he eventually died.

The opening took place before a distinguished panel of representatives of the management of the city’s cultural assets and who were now on the Board of the newly formed Richard Wagner Museum Foundation, along with representatives of the RWVI, the Bayreuth Festival and the Wagner Family.  The Foundation had been established at the initiative of Professor Alessandra Althoff-Pugliese, President of the ARW Venice in order to bestow official recognition on the museum as part of the city's heritage and thus to guarantee its preservation for the future. After a unanimous motion to preserve the museum in Ca’ Vendramin Calergi approved by the Delegates’ assembly at the Budapest Congress, the RWVI had become one of the founding members.

This popular event had to be run twice to accommodate the many members who were keen to see the museum and were delighted to attend the opening.

The evening saw delegates either attend a stunning performance of Don Carlo at La Fenice, or the Wagner-Verdi “the Force of Destiny” concert in the Ateneo Veneto of the Wagner Trio founded by Orazio Sciortino,  Bayreuth Scholar 2009 of ARW Venice.  A splendid dinner at La Fenice followed the musical events.

On the last day of the Congress delegates had the option to attend Mass at St. Mark’s Cathedral or visit the Wagner Museum.

The evening offered a lively concert in the church of San Vidal by a local orchestra “Interpreti Veneziani” founded and directed by Paolo Cognolato, Bayreuth Scholar 1992 of ARW Venice, who gave a rousing performance of works by Vivaldi, Mendelssohn, Wagner and Paganini.  This was followed by another delightful communal meal in the historic Conservatory of Music.

We were all sad to leave this beautiful city, the scene of such devastating flood damage a few days before the Congress began and we all agreed that we left a small part of our hearts behind.  The courage of Venice and its citizens in withstanding the forces of nature is truly inspiring.

Special thanks must be extended to Professor Alessandra Althoff-Pugliese and her team of helpers who put together such an impressive and delightful programme for the delegates and who shared her love of Wagner and Venice amongst us.
Back to overview

150 years jubilee in Vienna
Celebrations of 150th anniversary of the Richard Wagner Society in Vienna. A report from President Rainer Fineske.
learn more
R. Wagner and his wife Minna. The London letters
Eva Rieger gives a talk, via zoom, on Minna Wagner,.
learn more
An Interview with Katharina Wagner via Zoom
Wagner Society of Southern California. A live Interview with Katharina Wagner by John Mastrogiovanni. A zoom event.
learn more
Wagner Days in Venice 2022
Wagner Days in Venice, November 19th and 25th.
learn more
Wagner Society Budapest celebrates 150 years
The Richard Wagner Society in Budapest celebrated its 150th anniversary from 8.10 - 11.10. 2022
learn more
This website uses cookies to enable certain features and to improve the offer. By continuing, you agree to the use of cookies. More information.