The WS Munich out and about in Hamburg and Bremen 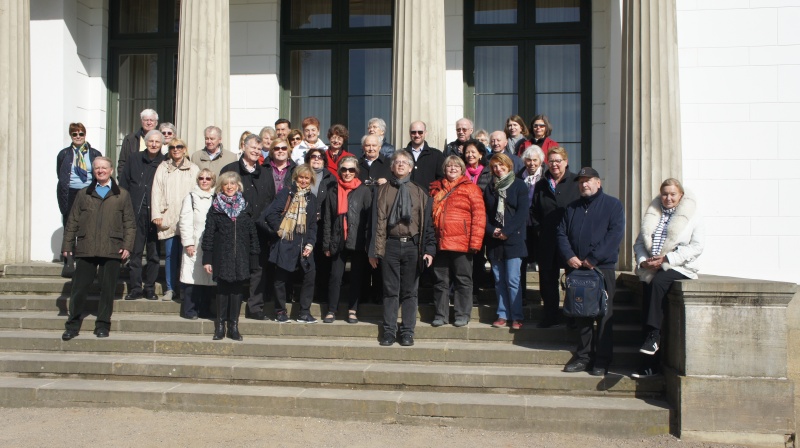 The Chairman of the Munich Wagner Society, Karl Russwurm, found himslef obliged to fulfil an old promise,
"In the first few months of the new year, our members will get to go to a concert in the newly opened Elbphilharmonie."

During the run-up to the trip, which took place from 23rd to 30th March, 2017, the anticipation and tension mounted, spurred on by the exuberant media reports about the new concert hall .

It was with great joy that the Munich members embarked on their journey to the far North on March 23rd, although no-one could have foreseen what a great success the trip would turn out to be.

The Elbphilharmonie's impression of space, the overwhelming acoustics, even the incredible quality of the performance (Strauss's Don Juan, Korngold's Cello Concerto in D minor and Sinfonietta), along with the positive impression created by the Staatsoper (with a performance of Tosca among others) and by the other cultural offerings (in Worpswede, Bremen and Lübeck),  all of which took place in perfect weather, filled our hearts with joy.

The 40 members from Munich also counted as highlights their meetings with several other Wagner Societies.  A group from the Bayreuth Wagner Society, with their Chairman Nicolaus Richter, were also in Hamburg at the same time.  In Bremen we met with newly-elected board member, Ursula Myke.

During a visit to the composer's quarters, we had a brief but cordial meeting with a group from Strasbourg led by their Chairman, Louis Oster.

And the Hamburgers?  As seats for group tours in the Elbphilharmonie were only available for 60 people, we offered our excess tickets to the Hamburg Wagner Society. By agreement with Dr. Doebel, the long-standing Chairman, and with Dr. Kolberg, the tickets were successfully allocated.

And so the Munichers and Hamburgers were pleasantly astonished together at the splendid construction perched over the Elbe before our paths diverged again, with one group hurrying out into the local traffic, and the other to the railway station. The hours spent on the train were amply justified by the wonderful cultural events that we enjoyed together with friends old and new.

Next stop on the Wagner train: Budapest!

Best regards
Karl Russwurm, Munich
Back to overview
This website uses cookies to enable certain features and to improve the offer. By continuing, you agree to the use of cookies. More information.