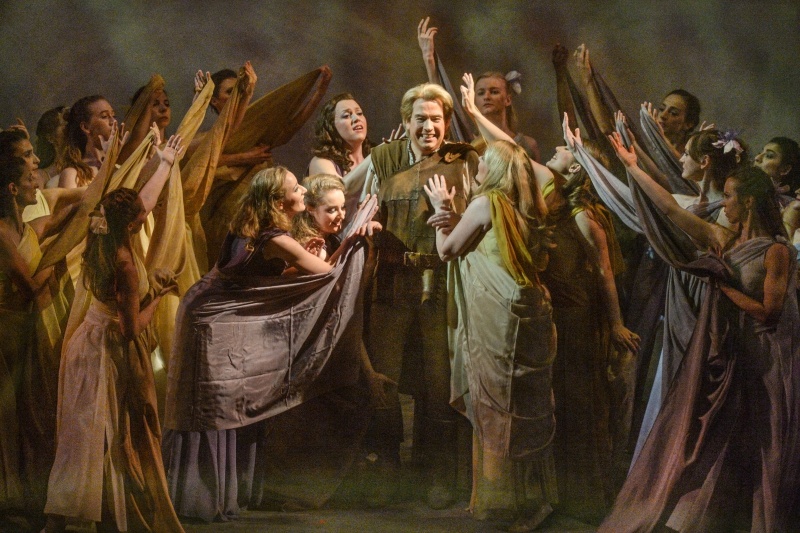 Hans Schüler's production of Parsifal celebrated its 60th anniversary in Mannheim, in the presence of Horst Eggers, RWVI President and numerous other Wagner lovers.

With its lighting effects from the  "New Bayreuth" school and its complex projections of slides onto a gauze screen, Hans Schüler's staging, created in 1957, still exerts a fascinating visual power.

To celebrate this jubilee, Mannhein's Wagner Society, spearheaded by its dynamic and friendly President, Monika Kulczinski, managed to raise € 35,000 in funds for the restoration of the original sets: a magnificent initiative that will enable Wagnerians from all over the world to come and admire this iconic spectacle, a veritable flagship project for the National Theatre of Mannheim.

For the premiere, several members of the Board of the International Association of Wagner Societies, headed by the President, Horst Eggers, made the trip to Mannheim. Below you can find translated excerpts from an article, including an interview with Horst Eggers, published in the Mannheimer Morgen of 11 April 2017.

Despite his initial skepticism, the President of the International Association of Wagner Societies expressed his enthusiasm for the Mannheim's historic Parsifal.

"I thought it would be a dusty old production"

The production is honest and radical at the same time. "I thought it would be dusty," Horst Eggers, President of the International Association of Wagner Societies, feared when he first heard about this 1957 production of Parsifal. In the end, he was totally converted: "I did not expect such an exceptional staging, "was the view expressed by this leader of the" Wagnerians. "

The International Association of Wagner Societies has 130 member societies throughout the world, comprising a total of 22,000 members. "We're the biggest fan club for a composer," said Eggers. And several hundred of his members came to this jubilee "Parsifal" - in Mannheim.

Amsterdam, Annecy and Basel via Dresden, Paris, Salzburg, Winterthur and Zurich: the places to which Alexander Wischniewski, box-office manager of the National Theatre Mannheim, issued tickets for the special Palm Sunday evening performance. No less than 45 members of the Frankfurt Wagner Society attended. They heard about the fundraiser organized by the Wagner Society Mannheim for the restoration of all the original sets and spontaneously raised a donation of 240 Euros while travelling in their coach.

"This production, with its great aesthetics, has more than simply qualitiy to offer," commented Dirk Jenders, President of the Wagner Society of Frankfurt, when handing over the funds they had collected. And it was these aesthetics that also convinced Horst Eggers. For two years now, he has been at the head of the Wagner Societies all over the world. "I have always been aware of the legendary reputation of Mannheim's production," he said. Now he can "very well" understand it. "It is truly a great experience," he added. This historic staging offers "simply beautiful images, timeless beauty,"  In addition, he noted that the National Theatre Mannheim has an "absolutely excellent orchestra, and a remarkable group of singers."

Horst Eggers in remarks expressing his gratitude, welcomed the way in which the Mannheim Theatre and the Wagner Society celebrated this jubilee - and in particular the significant donation of 35,000 euros collected by the Wagner Society of Mannheim. "This represents an excellent commitment, which is fully appreciated and deserves a great deal of respect," Eggers told Monika Kulczinski, President of the Wagner Society Mannheim, as he presented her with the Medal of Honour of the International Association of Wagner Societies.