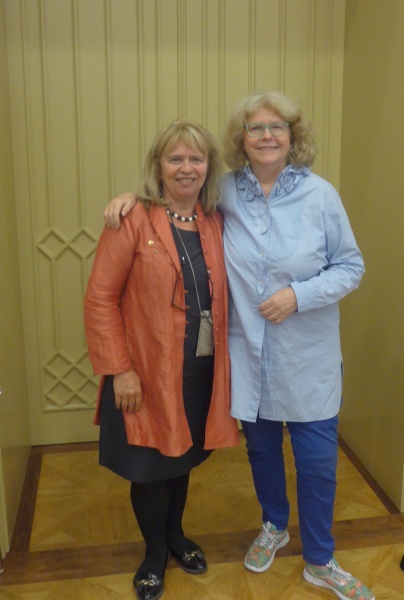 The Icelandic Wagner Society are delighted that Ms Wagner -Pasquier will attend their annual celebrations on 27th October and will give an address on the theme "Wagner as Wagner".
At this year's Wagner Congress in Budapest, the Chair of the Iceland Wagner Society Selma Gudmundsdottir agreed informally with Eva Wagner-Pasquier that the latter would come to Iceland in the Autumn of 2017 as the guest of honour at the Icelandic Wagner Society's annual celebrations. A formal invitation was sent shortly afterwards to Ms Wagner-Pasquier who responded that she would indeed come.

This visit will continue a fine tradition of this young society. Wolfgang Wagner visited twice on the occasion of the short version of the "Ring an einem Abend" in 1994 at the National Theatre of Iceland.
Despite his heavy workload as acting Director of the Bayreuth Festival he was pleased to act as artistic consultant on this project and he managed to be present at the premiere in May 1994.  The original idea had come from him.

This production of the mini-ring took place at the Reykjavik Festival in collaboration with the Icelandic Opera, the Symphony Orchestra and the National Theatre. These institutions will now welcome with open arms the daughter of Wolfgang Wagner, former Festival director Eva Wagner-Pasquier.. She will be an honorary guest at a concert in the new concert hall Harpa on October 26th, and will also attend a performance of Tosca on Oct. 28 at the Icelandic Opera.

Ms Wagner-Pasquier has also been invited to visit the National Theatre .

Selma Gudmundsdottir was on the board of the Reykjavik Festival from 1990-1994 and was responsible for the co-operation with Bayreuth over the short version of the Ring. The following year, she founded the Wagner Society in Reykjavik, of which she is still the Chair. The Society currently has a 250 members, a figure that compares well to the membership of some of the larger German cities..

Photo: Eva Wagner-Pasquier and Selma Gudmundsdottir in Budapest in June.
Back to overview
This website uses cookies to enable certain features and to improve the offer. By continuing, you agree to the use of cookies. More information.