In the presence of President Egils Levits and the mayor of the Hanseatic city of Riga, M?rti?š Sta?is, M?ris Gailis received the keys to the former German Theatre in the heart of the Old Town. Ceremony for handing over of the building ensemble was officiated by Renars Griskevics, Chairman of the board, SJSC State Real Estate. After the third reading of the bill in late summer, the Richard Wagner Association of Riga, whose chairman is Maris Gailis, has come a step closer to its goal: renovation and restoration of the historic building, as well as revival and revitalization of the theatre. 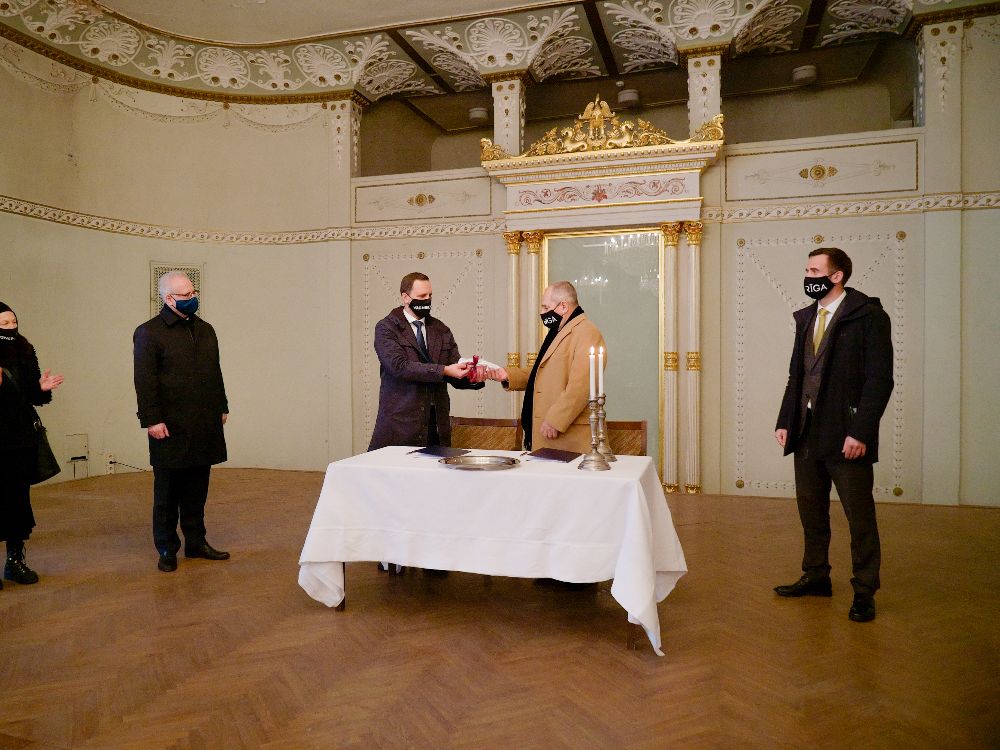 President Egils Levits, who is also the patron of the project, underlined: ‘I support this forward-looking German–Latvian project. This building is the embodiment of previous two and a half centuries of Latvian history. This project will enrich the cultural life of Latvia and also the whole Europe. I am pleased that this Hall will soon regain the spotlight it deserves as a cultural beacon by the Baltic sea in Northern Europe. It will quickly become one of the main attractions in Riga. People will come here to enjoy culture. It is one of those magnetic places every city must have. People are attracted to cities for various reasons, and cultural life is one of them. I wish the project best of luck.’

In recent years, the Riga Richard Wagner Society had taken over the building ensemble, in which Richard Wagner worked from 1837 to 1839. The author of the idea, Maris Gailis, emphasized today: ‘Handing over of the key is the most important prerequisite for preserving this unique ensemble of buildings in the Old Town of Riga. Project “Renaissance of the Wagner Theatre Riga – GesamtkunstWerk21” is our way of honouring and acknowledging the importance of the house for Europe and our country.’

Special architecture of the house fuelled Wagner’s particular interest in a new type of opera house, a type of building similar to the first building of this kind erected later in Bayreuth. It also laid the foundation for his vision on how to merge all art forms into one universal work of art-the Gesamtkunstwerk. Former festival director Eva Wagner-Pasquier and Maris Gailis joined forces and convinced the great-granddaughter of Richard Wagner to become the patroness of the project. Project GesamtkunstWerk21 will become an arts incubator for all arts – old and new, serving as a platform for conceiving, creating and implementing new multidisciplinary ideas. Eva Wagner-Pasquier is convinced that the project will be a success: ‘Riga is the place where my great-grandfather, who left a profound mark and revolutionised European art and culture, became a figure of continental magnitude. This project places the significance of his work in the European context. By bringing this special place with such musical and historical relevance back to life, giving it back the features of universal art form while adapting it to 21st century needs, we are doing a fantastic job. It is a true success story.’

Project financing burden will be distributed among several stakeholders. In addition to funding from the Latvian government and the city of Riga, German government will also decide on additional co-financing in the coming weeks. Moreover, the project is very likely to also be financed by Brussels.