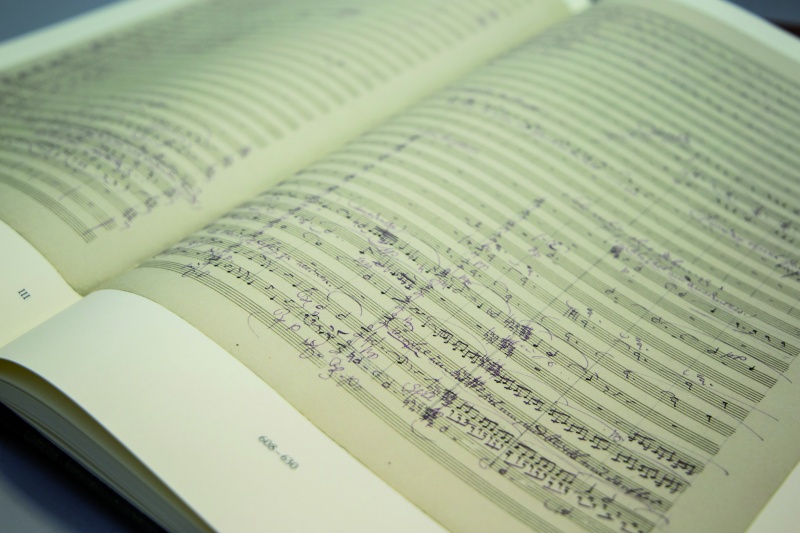 Richard Wagner's score for "Parsifal", his "Weltabschiedswerk" has now been published by Musikverlag Bärenreiter as a high-quality facsimile
"Die Zeit is da"

Richard Wagner's score for "Parsifal", his "Weltabschiedswerk", as he himself called it, (RWW 111), has now been published by Musikverlag Bärenreiter as a high-quality facsimile with great attention to detail.

The score has unusually been written in violet ink, which Wagner used in the last years of his life, in clear and beautifully legible handwriting. With the great themes of knowledge, compassion and redemption, Richard Wagner dealt with the theme in "Parsifal", which he completed 13 months before his death.

He described his inaugural stage play "Parsifal" as his "most reconciling” work, and even at its premiere on 26 July 1882 in the Bayreuth Festspielhaus, for which it was exclusively written, it was celebrated for its mystical sound-worlds and compositional technique, and to this day continues to inspire ever-new interpretations and discussions.

Wagner wrote the autograph almost entirely in violet ink, laid out the pages with great care and gave the autograph to his wife Cosima as a gift. This well-kept treasure has always remained in the possession of the family.

The facsimile is published in its original size and reproduces the extensive score in an elaborate four-colour print in the most accurate way. Without disturbing the overall impression, the reference and bar numbers on each page make it easy to use. In the accompanying text, Ulrich Konrad explains the special features of the work and manuscript with his clear and comprehensible formulations.

"Knowledge through compassion, the pure fool"!

When you begin to study the score, you will hear and see before your mind's eye the many interpretations and different stagings of this extraordinary work that you have seen, and those of us who have once experienced the "Weihevolle Werk" live in Bayreuth will never forget these worldly spherical sounds.

Parsifal is the work of Wagner which has been performed most often in the Festspielhaus to this day and which kept Wagner busy in Marienbad from 1845. In 1865 King Ludwig II asked the composer to execute the Par(z)ifal plan. In January 1877 Wagner began to implement the Par(z)ifal plans at Cosima's request and soon changed the title to "Par(s)ifal" because he referred to the alleged Persian words for pure, (fal), and fool, (parsi), as in the heart of a pure fool the figure is laid out in the work of Parsifal. It took until January 1882, during a long stay in Palermo, for the music to be fully composed and the score to be completed.

Richard Wagner sold the publishing rights to the successors of his publisher and friend Franz Schott in Mainz at the sensational price of 100,000 marks.

Claude Debussy, who did not spare his criticism of Wagner's works, remained probably the most prominent admirer of Parsifal. "One hears there orchestral sounds that are unique and undreamt of, noble and full of power. This is one of the most beautiful monuments of sound erected for the imperishable glory of music".

The Leipzig theatre director and impresario Angelo Neumann, who became famous for his Europe-wide performances of the Ring of the Nibelung with his travelling theatre, authorised by Wagner, reported on the impression of the premiere during a conversation at a first night dinner in a cheerful circle of a comment by a Mr. Förster, (husband of Elisabeth Förster-Nietzsche), "You see, Wagner is dying". When Neumann asked him how he came to such a comment, the latter answered: "A man who has created what we have experienced today cannot live any longer. He is finished. He must die soon."

Richard Wagner did indeed die almost 7 months after the first performance of Parsifal (on 26 July 1882) on 13 February 1883 in the Palazzo Vendramin Calergi in Venice.

This high-quality, unique Parsifal score and the authenticity of this facsimile make this a luxury edition for Wagner lovers, which makes it an exclusive gift for yourself or your loved ones on special occasions. One of the most beautiful experiences is to read the Parsifal during one of your favourite recordings on DVD or CD and to immerse yourself in the atmosphere of the work.